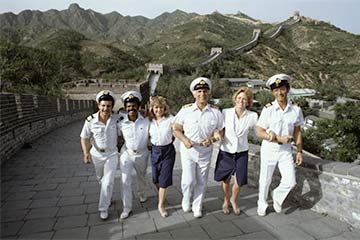 The cast of 'The Love Boat' walks along the Great Wall of China in 1983. In real life, ship workers have little time to visit their ports of call.
© Bettmann/CORBIS

News bulletin: Not everyone gets to steer the ship. Generally, cruise workers are divided into two groups: crew members and staff employees. Staff positions include those workers tasked with the physical operation of the ship, getting the vessel from one place to another on time and in one piece, as well as those likely to have the most interaction with guests. The captain and other members of his team are staff members, as are hotel, guest relations and entertainment workers. Crew members, on the other hand, include those in restaurant services, such as waiters, busboys, bartenders and cooks. Housekeepers, cabin stewards and maintenance workers are also considered crew positions.

Not only does the type of position a worker holds determine the type of work he or she does; it also impacts the person's pay and living situation aboard the ship. Staff members typically earn higher wages than their colleagues on the crew. They also get better digs: Staff workers usually live on the upper crew deck, where they have more space and may even get their own rooms. The captain and his or her staff typically have separate housing quarters closer to the vessel's controls [source: Motter].

Crew members, on the other hand, live farther down in the ship's bowels and share rooms with one or more other workers. Unlike staff workers, crew members generally aren't allowed to take their meals in public areas or to wander the ship and interact with passengers during their downtime [sources: Motter, Norwegian Cruise Line].

A third category of workers aboard many cruise ships are those that don't actually work for the ship owner. Concession workers are employed by third parties who operate businesses like gift shops, casinos and various other forms of entertainment. They may also include the ship's doctor and onboard medical workers. These employees' ship access and rooming situations often vary based on the cruise operator for which they work [source: Motter].