Why Restaurants Love Buffets Even More Than You Do 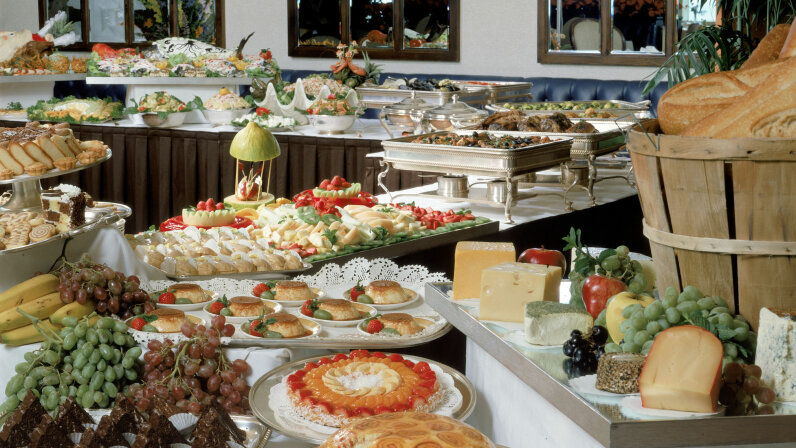 All you can eat? The placement of the buffet items is not random. Batista Moon Studio/Getty Images

It's lunchtime on a Tuesday, and you have exactly 27 minutes before you need to be back at the office for a marketing meeting. If you have to choke down one more dry turkey sandwich from the corner deli or a tasteless salad from the hippy co-op, you're gonna cry. But what's this — the Indian place that's usually only open for dinner has an $8 lunch buffet? Score!

When it comes to food, time-crunched Americans love variety, speed and low prices, which is precisely why they love a good buffet. For decades, savvy restaurant owners have been cashing in on the buffet boom — not just all-you-can-eat chains like Golden Corral or China Buffet, but regular a la carte restaurants that choose to offer a weekday lunch or Sunday brunch buffet.

Chefs and restaurant industry consultants say that when executed right, a well-designed buffet with steady foot traffic (stomach traffic?) is a certified moneymaker. Here are five reasons why:

"The purpose of a buffet is twofold: to feed a lot of people and to give them choices," says Shawn Bucher, a chef, author and host of the podcast Business Chef.

Making money in the restaurant business is all about getting people in the door and turning over tables. When you load up a buffet with lots of choices, customers get excited. And since the self-service model is much faster than the waiter-and-menu system, guests are in and out quicker.

Which is also why buffets are ideal for extremely high-volume occasions. When Bucher worked in the restaurant of a large hotel in Salt Lake City, Utah, it drew big crowds for its annual Mother's Day and Easter buffets.

"We knew we were going to be feeding somewhere in the neighborhood of 5,000 people that day," says Bucher. "When you have seating for 500, trying to do 10 table turns is just unrealistic. But a buffet, which allows people to come and go quickly, works out a lot better."

2. Restaurants Save Money With a Skeleton Crew

The three main costs of running a restaurant are rent, food and labor. One of the big reasons why weekday lunch and Sunday brunch buffets are so popular with restaurant owners is that they are major labor-saving devices, and therefore cost-saving devices.

Aaron Allen is a restaurant consultant and industry analyst. He explains that a buffet cuts back on staff throughout the restaurant.

"If the guest is walking through the buffet and plating their own food and basically serving themselves, you don't need as many front-of-house workers," says Allen, referring to waiters and bussers. "And for the back-of-house [kitchen staff], you don't need to have an a la carte culinary team making items to order. Just a few cooks can make items in batches and replenish, so you can work with a smaller crew and produce more volume."

Matthew Britt, a chef and instructor at Johnson & Wales University in Providence, Rhode Island, says that lower staffing needs and the predictability of buffet cooking are a great way for an a la carte restaurant to balance risk. Britt says that with the rise of nouvelle cuisine in the 1970s and 1980s — light, freshly prepared dishes with seasonal ingredients — profit margins at restaurants became much thinner.

"There's a lot of uncertainty in a nouvelle cuisine dinner service. You don't know who's coming in or what they're going to order. You need an army of highly trained cooks to facilitate all the guests' needs," says Britt. "The lunch or brunch buffet was the answer to that."

Like a casino, a restaurant buffet lures customers in with the promise of a big payoff — all-you-can-eat shrimp, crab legs or prime rib — while disguising the fact that the economic odds are entirely in the restaurant's favor.

"All you can eat is a fallacy," says Britt. "Some people think they're going to take down the house, but the house always wins. You're not going to eat your way past the profit margin."

Allen says that restaurants set their buffet pricing very carefully and lay out the buffet offerings strategically to ensure that for every Homer Simpson who attempts to eat the entire steam tray of lobsters, there are 20 other customers who get distracted by the sheer variety of choices and fill up on the cheap stuff like bread, soups, salads and desserts.

In almost all buffets, the expensive proteins like prime rib and seafood are placed at the end of the line. By the time customers get to the slicing station or shrimp tray, their plate is already filled up with sides and starches.

The strategy is based on behavioral economics. A study from the Food & Brand Lab at Cornell University found that 75 percent of buffet customers took the first food offered on the buffet line, and that the first three foods encountered in a buffet accounted for 66 percent of what they ate.

Britt says that buffets also use smaller plates to further mess with the diners' minds. "When they start to get full, they'll think, I've already had two plates, so maybe it's time to quit."

4. You Can Get Creative With Last Friday's Fish

Not only are buffet customers encouraged ("tricked" is such a nasty word) to fill up on the cheap stuff, but Bucher says that "a lot of the salads and soups are generally leftovers that have been repurposed for the buffet."

It's no great surprise to anyone who's worked in a restaurant, or read Anthony Bourdain's "Kitchen Confidential," that, as Britt says, "Half the Sunday brunch buffet menu is left over from the week's service."

That's not saying that the kitchen is trying to pawn off nearly expired fish or meat on unsuspecting customers, only that buffets are excellent opportunities for chefs to stretch their creative culinary muscles. Extra prime rib, for example, can be turned into an eggy prime rib hash or a french dip sandwich. It's all about reducing waste while giving customers something new.

Britt remembers a brunch dish called Eggs Goldenrod from a restaurant where he worked as a teen, which was nothing more that leftover hard-boiled eggs in a creamy bechamel sauce.

"You put it in a chafing dish with a fancy name and all of a sudden you have something that's new and exciting and seems to regular weekday guests like it's just a brunch thing. When in reality, it's a trickle-down special," says Britt.

5. Even High-end Buffets Are Still Profitable

Buffets don't have to be cheap. Far from the quantity-over-quality philosophy of big-box buffets is a separate but equally booming market for super high-end fare. At the Hotel del Coronado in San Diego, California, brunch guests can feast on a chilled seafood bar, fill up at several carving stations, and be their own bartender at the gourmet Bloody Mary bar. The hotel's regular Sunday brunch buffet runs $98 for adults.

The Mother's Day brunch sells for $140 per adult.

The concept of a high-end buffet is the same from an economic standpoint, says Britt. The higher price point allows you to offer higher-quality items, but the overall idea is still to wow with selection while balancing less-expensive and filling choices with the Beluga caviar bar.

Now That's Too Bad
Cornell's Food & Brand Lab has been the source of some headline-grabbing research around food psychology and creating healthier school cafeterias, but lead researcher Brian Wansink has come under fire recently for allegedly fudging data. Some buffet studies are among those being re-evaluated, but not the one we cited, as of the time of publication.