Who tests out amusement park rides? 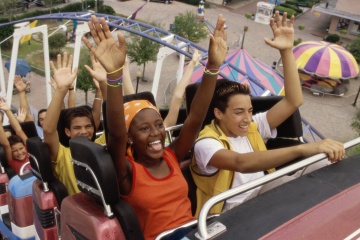 Many would be envious of you if you got paid to ride rollercoasters, but it's not all fun and giggles. Being among the first riders can be risky.
Purestock/Thinkstock

In the mid-1980s, the now-closed Action Park amusement park in New Jersey offered intrepid employees $100 cash to test out its insane Cannonball Loop waterslide, which shot riders down a steep hill before launching them through a loop and spitting them out into a pool of water. (Legend has it that actual human beings were asked only after a crash-test dummy emerged from the slide in one piece, which apparently took quite a few attempts.) When the Schlitterbahn Kansas City Waterpark attempted to build the tallest waterslide on the planet in 2014, engineers used sandbags to determine whether the ride was safe. No one wanted to test the slide after the sandbags flew off, so park owner Jeff Henry braved it himself, taking his assistant and the slide's head designer along as human guinea pigs. When Henry survived the plunge, he invited journalists to test the slide before opening it to the public. When the Six Flags in Largo, Maryland, was ready to test its new Apocalypse rollercoaster, the park tapped coaster fanatic Sam Marks — who runs a coaster club in Virginia — to test its latest creation.

For the most part, this is how ride launches work: The first brave riders to test new rides are park employees, owners and designers, along with the journalists and theme park fanatics who will help spread the word and pump up interest in the ride.

If you're looking to test rides for a living, there are a few different career paths you could follow. You'd need a strong engineering background to go into ride design, but the job comes with a few perks — namely, the opportunity to create the rides of your dreams and to test prototypes of your creations long before they're ever unveiled to the public. You can also earn the chance to test new rides if you pursue a career with an independent firm that specializes in ride testing. Officially known as forensic engineers, these professionals might use nondestructive testing to analyze the quality of steel or try out different types of harnesses to balance comfort and safety.

Want a chance to test new rides but don't have an engineering or technical background? Get a job at a theme park and work your way up. One operations manager at Schlitterbahn gets paid to test rides all day to ensure that guests will have an optimal riding experience. England's Drayton Manor Theme Park employs a guest services manager who's responsible for riding every attraction in the park each week. Sure, these positions are limited — though plenty of parks have them — but if you're willing to put in the time, there's no reason you can't land one.

If you want to test rides without quitting your day job, plenty of companies offer promotions to hire temporary ride testers, who are paid to ride and promote various attractions. In 2009, Orlando's "67 Days of Smiles" campaign paid one lucky winner $25,000 to visit theme parks for the summer, and European resort marketer First Choice offered $32,000 and a six-month contract to visit parks around the world and write up reviews on top attractions. Improve your odds of landing this type of gig by building a strong social media presence and joining ride clubs in your area.