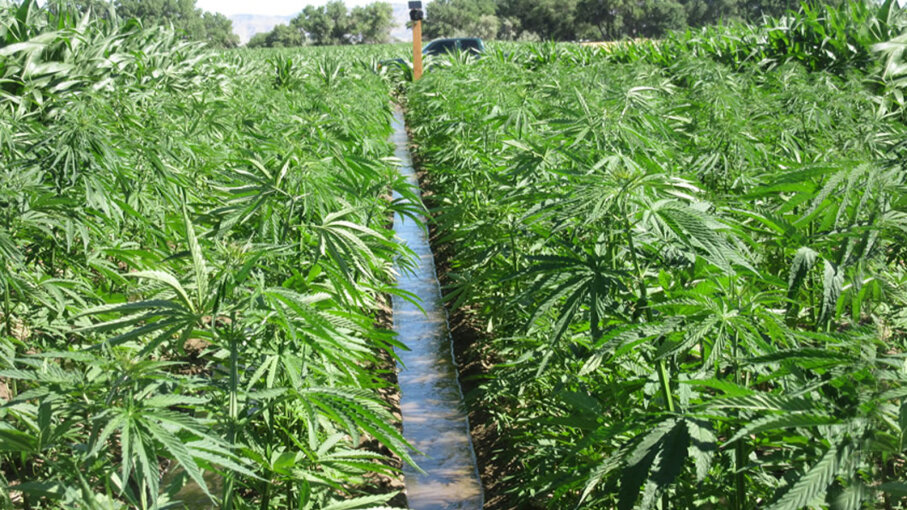 In fields across the United States, hemp is about to take over. The one-time staple of Revolutionary Age farms — Thomas Jefferson, Benjamin Franklin and George Washington all grew it; caretakers at Mount Vernon still reap it — was banned for decades in the U.S. for its somewhat unfortunate association with its party-hearty cousin, marijuana.

But now that Congress has passed a new farm bill that contains a provision that will legalize and regulate the plant, hemp fields are poised to start edging out some of America's more traditional crops, from corn to cotton, from Washington state to Florida. The hemp plant holds great promise for beleaguered farmers everywhere ... though, for many, it remains largely misunderstood.

The New Age of Hemp

Cory Sharp is the CEO of HempLogic, which provides services — from "seed to sale," the website claims — to fledgling hemp farmers.

"My web traffic quadrupled right after [the farm bill] passed. I'm getting 50 emails a day when I was getting 10. There's a lot of excitement," Sharp says. "I get asked this all the time: 'Does it feel like a gold rush?' Yes, it absolutely feels like a gold rush, and I'm the guy supplying the shovels and the wagons and the supplies."

A 2014 law allowed the growing of hemp by states and some universities for research. (The year before, forward-thinking Colorado allowed a farmer to grow a hemp crop — the first crop in decades — in a closely watched experiment.) By 2017, 19 states were growing hemp on some 25,000 acres, about three times more acreage than the year before.

Now, with the passage of the new farm bill, the shackles are off. "It's going to blow," Sharp says. "It's wide open. It's the wild, wild west."

In 2017, growing hemp was an $820 million industry in the U.S., according to Eric Steenstra, the president of the advocacy group Vote Hemp. In 10 years, there's no telling how much that might balloon.

Crowding Out Other Crops

The rise of hemp may come at a cost to crops that require lots of water and pesticides, like cotton, soybeans and corn. The allure of hemp is strong, for many reasons. From Modern Farmer:

Hemp grows more vigorously than corn, but requires less water, pesticides, herbicides, and fertilizer, earning it a reputation as a sustainable crop. The plant has over 25,000 known uses and is potentially an eco-friendly alternative for other crops commonly produced on an industrial scale ...

Hemp is an ideal plant for organic farmers because it requires minimal inputs, is fairly resistant to pests and diseases, and grows so fast and tall that it outcompetes weeds, minimizing the need for hand cultivation — a major labor cost for most other organic crops.

"When I have farm wives calling me because they want to grow hemp to save their farms, their fourth-generation farm, and they start to cry ... it makes you want to help them," Sharp says. "But hemp is a very unique plant. You have to understand how it's grown. It grows very easily, but it has to be done correctly in order for it to have any value. And people are not understanding that. I always tell people, 'You want to grow 200 acres? Grow two.' You have to be very, very careful."

The stems of the hemp plant have fibers that can be spun into things like rope or used to make clothing.
Wikimedia Commons/Public Domain

With the passage of the farm bill, hemp overcomes, at least for many, a huge stigma: its association with marijuana. The two come from the same plant, Cannabis sativa, but are "significantly differentiated at a genome-wide level." Or, as Vote Hemp explains, they're just different, "just as Chihuahuas and St. Bernards are different breeds of Canis lupus."

They were lumped together in the Marihuana Tax Act of 1937 and again with the Controlled Substances Act of 1970. But hemp doesn't contain nearly the levels of the psychoactive ingredient tetrahydrocannabinol (THC) — the stuff that creates a high — that marijuana does. Hemp is less than .3 percent THC, according to the Ministry of Hemp.

The hope from hemp backers and future hemp farmers is that, with this new provision in the farm bill, hemp again becomes legit in people's eyes and its myriad uses — among thousands, it can be used as a food, a fuel, its fibers can be spun into clothing or used in construction — will benefit all.

"It's kind of amazing how far we've come all the sudden," Steenstra says. "When we started on this, people like [Senate Majority Leader] Mitch McConnell had a beef with us. They absolutely did perceive this as being somehow connected to marijuana legalization. It took a lot of just basically knocking on doors, sitting in meetings and crafting the message, focusing on the economics of this, the potential for farmers and businesses, and that was a message that resonated with members of Congress."

NOW THAT'S INTERESTING
Another product that figures to benefit substantially once the president signs the farm bill is cannabidiol (CBD), the non-psychoactive anti-inflammatory that has been shown to reduce pain and is an active ingredient in the only FDA-approved cannabis-based drug, Epidiolex. Hemp-based CBD products have experienced a 440 percent increase in sales — the CBD is mostly imported, which is not against the law — since 2014, according to Vote Hemp.