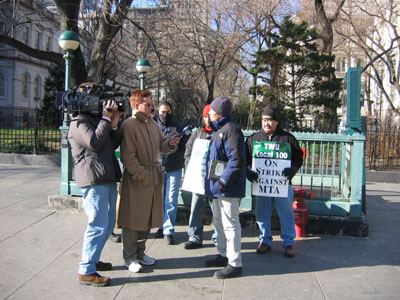 Employers have also gone to court to have strikes declared illegal. In fact, the court's decision in the 1806 Phildelphia cordwainer's trial declared all strikes to be criminal conspiracies [ref]. Unions continued to thrive, and strikes were often successful, but the possibility of criminal prosecution weakened them. It wasn't until the Wagner Act of 1935 that Americans were given the official right to form unions and go on strike.

Strikes can still be declared illegal, however. The 2005 New York City transit union strike forced the City of New York to levy $1 million per day fines against the union, claiming the strike was illegal. President Ronald Reagan defeated the air traffic controllers strike in 1981 by declaring the strike illegal and ordering the FAA to fire any controller who didn't return to work within 48 hours. The government prevented the union from paying striking workers by freezing its assets and also put five union leaders in jail for short sentences. Eventually, all the controllers were fired and replaced, though at a cost estimated at more than double what the union was asking for in the first place [ref].

Today, some employers fight union demands by asking for concessions from workers. They claim that the company will have to declare bankruptcy, forcing all the workers out of their jobs, unless the union agrees to wage cuts and a reduction in benefits. If a company is not doing well, increased wages and benefits that unions secure for workers can help drag the company down. However, many union officials view this as an underhanded tactic meant to circumvent negotiations. Wayne Bieger, president of UAW Local 846 in Buffalo, New York, argues that negotiations should take place at the bargaining table, not in a bankruptcy court: "We [the union] negotiate an agreement in good faith. The company should have the foresight to understand how the agreement will affect them, just like the union has to have foresight," he said. "To try and get concessions and negotiate through bankruptcy court rather than at the negotiating table is wrong."

Next, we'll take a look at the laws that regulate strikes in the United States.