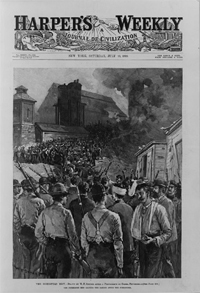 An engraving on the cover of Harper's Bazaar shows Pinkerton men leaving Homestead after surrendering to the strikers.
Photo courtesy W.P. Snyder Library of Congress Prints and Photographs Division

Employers don't always accept a workers' strike calmly. They can try to fight back against the union, sometimes through lawsuits and legislation, sometimes with violent thugs. Some employers used companies that offered strikebreaking services, such as the Pinkerton Detective Agency. Former cooper Allan Pinkerton started the infamous agency in the mid-1800s [ref]. Although it usually engaged in standard crime-stopping detective work, they discovered there were profits to be made as strikebreakers. Many other companies were soon offering similar services, but strikebreakers were usually called Pinkertons.

A strikebreaking crew was essentially an armed mob of mercenaries. They reported to the picket lines to escort scab workers into the business, or to intimidate the strikers. The crew also acted as guards to prevent strikers from damaging company property. In the 1800s and early 1900s, conflicts between striking workers and Pinkertons often grew bloody. In 1892, a standoff at Homestead, PA escalated into "the Battle of Homestead," a fight involving massive fires, a cannon and hundreds of rounds of ammunition. In the end, three Pinkertons and ten strikers died [ref]. Incidents like this one, combined with strikebreakers' penchant for mistreating the populace, lead to a sharp decline in public acceptance of these tactics.

Government officials conducted investigations into strikebreaking activities, and many towns and states passed laws restricting their actions. By the 20th century, employers looking to defeat unions were using espionage and media campaigns to discredit their union opponents. The era of the violent Pinkerton strikebreaker gradually faded, although bloody battles continued to occur.