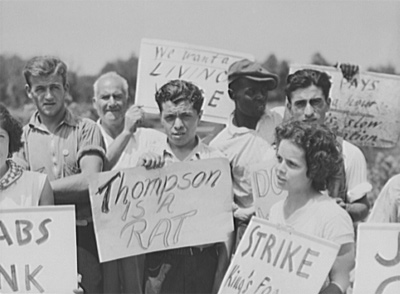 Many people associate strikes with picket lines. Workers bearing placards with slogans supporting their position file around the gate of their workplace, often chanting or even singing songs. The purpose of picketing is to draw public attention (and sympathy) to their cause, inform the public of the goals and the reasons behind the strike and discourage anyone from violating the strike order and going to work. Anyone who does this literally has to cross the picket lines, and they usually are called scabs.

Scabs can be union members who decide to work instead of striking, or they can be non-union workers specially hired by the employer to fill the positions of the striking workers. The term goes back to the 18th century, and probably refers to diseases common in that era that left victims with infectious scabs. Workers crossing picket lines would be "scabb'd" by the other union members (shunned and forced out of their jobs).

A picket sign outside a Ducktown, Tennessee copper mine during on October 1939 strike.
Photo courtesy Marion Post Walcott Library of Congress Prints and Photographs Division

In 1806, the Cordwainers Union of Philadelphia went on strike, and several union members became scabs. This was recounted in the ensuing trial by cordwainer Job Harrison:

In a few weeks [after arriving from England], some of the journeymen, who knew me, called upon me and requested me to join the body [union]...they notified me that it was my duty to come to the body. I told them I knew nothing about the body, I did not know there was such a thing. They told me if I did not come to the body, I was liable to be scabb'd; I did not know at that time what it was to be scabb'd; but some of the men explained it, and I told them that I was willing to be as good a member of their body as any other man. Their meaning was, that if I did not join the body, no man would set upon the seat where I worked; that they would neither board or work where I was unless I joined. By a seat I mean they would not work in the same shop, nor board or lodge in the same house, nor would they work at all for the same employer.

-excerpt from the testimony of Job Harrison, lead witness for the prosecution in (Commonwealth v. Pullis), 1806. [ref]

Sometimes union members will picket without striking. This is known as informational picketing. Prior to the air traffic controllers' strike in 1981, the controllers picketed outside airports during their off hours, holding signs and handing out pamphlets that explained their position [ref].