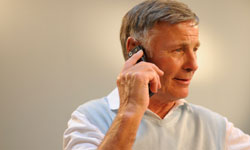 Help patients over the phone (or on the Internet) by working in telemedicine.
©iStockphoto.com/peepo

Doctors who want to spend their retired years at home but would still like to earn an income might consider telemedicine.

Although it may sound cutting edge, telemedicine is technically an old practice, in so far as it's medicine over a distance. It used to be done using a messenger or mail system (and eventually the telegraph and telephone), allowing doctors to correspond with patients. Now, with so many advancements in telecommunications, telemedicine is easier and more effective than ever.

If you have computer literacy, phone and a reliable Internet connection, you might be able to find part-time or full-time work from home helping to treat patients via the Web. Services like AmeriDoc.com like to argue that most visits to the doctor can be handled over the phone. They say that virtual doctor consultations are an efficient alternative that can also alleviate demands on doctors' offices.