by Josh Briggs
Prev NEXT
5 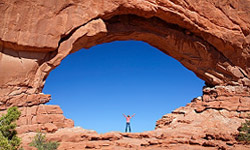 Like Idaho, Utah is a true western state, with ranches, forests, rivers and ski resorts. But Utah's main attraction may be its national parks – it has Zion, Bryce Canyon, Arches, Canyonlands, Capitol Reef, and the north rim of the Grand Canyon. Camping, hiking, rafting -- you name it, and you can find it in Utah. Fortunately, you'll find a low cost of living there as well.

Provo and Ogden both ranked high in The Daily Beast's 2011 rankings of cities that are the best places for "starting over" because of their relatively low cost of living and ample job opportunities. Provo was listed with a median income of $66,200, and a cost of living well below the national average. Ogden had a median income of $70,600 with a similarly good cost of living outlook. In the state's largest city, Salt Lake City, median home sales prices in Salt Lake City were at about $135,000, with median household income at about $44,000.

The small town of Farmington (population 18,300) hit No. 12 on CNNMoney's 2011 list of Best Places to Live. Farmington was praised for being close enough to commute to Salt Lake City while retaining its small-town charm and affordability.