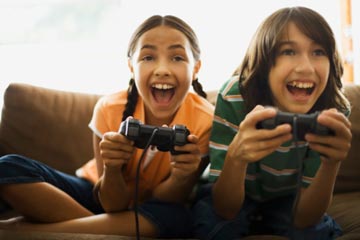 Do you know the ratings of the video games your kids are playing?
Jupiterimages/Brand X Pictures/Thinkstock

More than 250 million video and computer games were sold in the U.S. in 2010, according to the Entertainment Software Association. And if you or your kids purchased any of those games, then you might have spotted the game's rating. Just like movies and music, video games are rated to help people understand for whom the content is best suited. The video game rating usually appears as a letter on the front of the packaging -- and it can tell you a lot about what's inside.

Video game ratings are assigned by the Entertainment Software Rating Board (ESRB), a voluntary, self-regulatory group created by the Entertainment Software Agency. The ratings system is pretty simple. It's based on identifying the youngest age group for which a game is appropriate. They determine that age based on how often and how intense certain types of content appear, including violence, nudity, sexual themes, crude humor, alcohol and drug references, and gambling.

Currently there are seven ratings:

EC stands for Early Childhood. These games are appropriate for kids 3 and older, and contain no objectionable content.

E stands for Everyone, and is appropriate for anyone over age 6. Any objectionable language or violence will be extremely mild and infrequent.

E10+ is similar to E, but is for children over age 10. Violence and language are both mild, though there may be some suggestive themes.

T is for Teens over age 13. There may be some violence and crude humor, but objectionable language and the appearance of blood is minimal.

M is for Mature, and is appropriate for people over age 17. These games might contain violence, gore, sexual themes and strong language.

AO is for Adults Only -- so, nobody under the age of 18. It's similar to M, but there may be prolonged or intense violence or sexual content.

RP means Rating Pending. That just means the game hasn't been rated yet.

In addition to the letter rating, there's usually a brief description of what gave the game its rating. So, for instance, you might see a rating of "M," followed by "Blood, Intense Violence and Strong Language." Words like "strong," "intense" or "mild" give an indication of the extent or severity of certain content.

On the next page, we'll look at who rates the games and how.

Contrary to what you might be picturing, there isn't a roomful of young guys sitting around playing video games and taking notes. As a self-regulatory agency, the ESRB relies heavily on what the game developers say is in the game.

When submitting a game for a rating, game companies fill out a questionnaire about the game's content. In it, they have to be clear about any violence, sexuality, strong language or other content specified by the ESRB. They also have to submit a video recording showing all of the content they called out on the questionnaire.

The questionnaire and the video get reviewed by at least three members of the ESRB staff. Almost all of the ESRB staff has a background working with children, either through education, work history or having children of their own.

In some cases the games actually get played to verify the information submitted by the game company, but not always. It would take too long to have three different people play each game (some games take 50 hours to complete), and even if they did there's no way to be sure they'd catch everything. So they only play the games when necessary.

The entire review process can involve several rounds of deliberation among trained reviewers, and even communication with the game company. What results from this process is the rating you see on the game's packaging.

While the ESRB assigns the ratings and makes sure they're displayed clearly, there's not much they can do about enforcing who buys the games. That's up to the retailers, who enforce their own age restrictions by asking for ID at the register, and of course, parents who monitor what their kids are playing. Fortunately, almost all major retailers who sell video games work with the ESRB to help enforce the age minimums. There's even an ESRB Retail Council, which is an organization formed to help make sure retailers and the ESRB are all on the same page when it comes to understanding ratings.

One recurring issue with video games ratings is violence. On the next page, we'll look at whether video violence increases aggression in children.

Even though the ratings system is voluntary, almost all video games that are sold get submitted for rating. Some retailers refuse to sell unrated games, so it's actually in the best interests of the game companies to get their games rated.

In three of the last five years, games rated M and containing intense violence, blood and gore topped the lists of the best-selling video games. In 2010, M-rated games took 5 of the top 10 spots. Violent games seem to be pretty popular, but what impact, if any, does this have on the players?

There's been a lot of debate over the years about video game violence and its impact. Some claim that exposure to violence through video games makes kids more prone to committing violent acts. Others say that being repeatedly exposed to violence, even if it's fake, numbs people against how terrible it really is. There have been lawsuits, clinical studies and tons of research conducted trying to establish a link between video games and behavior. But the truth is, it's all still a bit murky.

For example, a study at Indiana University found that teens playing violent video games experienced stimulation in parts of the brain associated with emotional arousal. They also found decreased stimulation in the parts of the brain associated with self-control, and other studies indicate that reduced inhibition and self-control is what leads to aggressive behavior. Another study published in the journal Pediatricsfound links between violent video game playing and aggressive behavior several months later.

The problem is that it's not clear whether playing violent games actually causes aggressive behavior, or if there are other factors at play. For instance, being bullied can lead to violent behavior, but it might also cause kids to withdraw and seek out activities they can do by themselves, such as playing video games. In this case, gaming might not lead to violence; instead, a third factor -- bullying -- could encourage both game playing and violence, causing us to assume a connection where isn't one. What's more, even if playing violent games does affect how you think, it doesn't mean you're more likely to act on aggressive feelings. In fact, youth violence has declined in recent years, while video game sales have increased.

Still, it's important to monitor what types of content your kids are being exposed to. Ask your kids about the games they're playing, or just hang out and watch or play with them. Keeping the game console or computer in a common area makes it easier to stay involved. Ratings boards and retailers can only do so much -- parents need to be the first line of defense.

Parents and teens seem to disagree over how involved parents are in deciding what games kids play. A survey conducted by the Entertainment Software Association said 65 percent of parents check game ratings before buying. On the other hand, testimony to the Senate Committee on Commerce, Science, and Technology indicated that 89 percent of teens say their parents never check game ratings.