How to Become a Frugal Traveler

Is it cheaper to take a plane, train, car or bus? 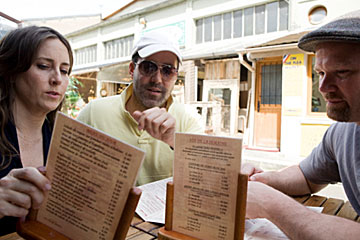 Once you actually get to your destination, money won't even be on your mind.
Allison Michael Orenstein/The Image Bank/Getty Images

Determining whether it's cheaper to take a plane, train or bus depends on numerous variables. How far are you traveling? Are you traveling alone or with the whole family? What's your car's gas mileage? Are you booking your flight in advance during the off-season, or are you booking a last-minute trip on a busy travel day?

The cheapest mode of travel depends on where you're going and who is traveling with you. For the solo traveler journeying long distances, airplanes are typically the most affordable option, while driving is the least economical. Let's say you're traveling the roughly 2,800 miles (4,506.2 kilometers) between New York and Los Angeles in your own car, which gets about 20 miles (32.2 kilometers) to the gallon. Assuming you're paying an average of $3.50 for each gallon of gas throughout the entire trip, the one-way cost of driving this distance comes out to $490. According to Expedia.com, a one-way, economy-class flight from New York's John F. Kennedy International Airport to Los Angeles International Airport booked for March 5, 2012, costs $151.76. Meanwhile, the cost of traveling by train from New York's Penn Station to Los Angeles' Union Station, costs $208, according to Amtrak.com.

But driving becomes more economical once you add on multiple passengers. Let's say you're making the same one-way trip in the same car, but this time you're driving with your spouse and two children. The one-way cost of driving remains the same $490 sum. But according to Expedia.com, the cost of the same flight for four people turns out to be about $614.24 altogether. Taking an Amtrak train with the same family of four costs $624.

However, each mode of transportation has drawbacks that muddy the picture. The extra funds required for tolls, hotels, food and other expenses incurred while driving over long distances can eliminate any savings easily. Air and train passengers may have to pay baggage fees and account for the cost of transportation to and from the airport. And upon arrival, non-driving travelers might also have to purchase a rental car, the cost of which can vary widely by region: According to the New York Times, a customer might pay nearly half as much for a rental car in Los Angeles as they might in New York City [source: Stellin].

Should you buy that extra collision coverage on your rental car? Read on and find out.