Top 5 Ways to Save Money on Home Lighting

by John Perritano
Prev NEXT
4 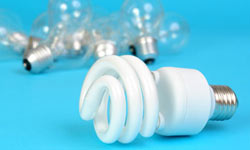 Traditional incandescent lights are not energy efficient and they only last about 750 to 1,000 hours in normal use. You can replace these bulbs with three energy-efficient choices: energy-saving incandescent bulbs; compact fluorescent lamps (CFLs); and LEDs, or light emitting diodes. Each will save you money, although some will save you more than others [source: EnergySavers.gov].

For example, energy-efficient incandescent lights will save you about 25 percent compared with traditional incandescent bulbs. That's because there is a small capsule of halogen gas that surrounds the bulb's tungsten filament. When the filament gets super hot, the halogen latches on to the tungsten's evaporating atoms. The gas then redeposits the atoms back on the filament. As a result, the bulb lasts about three times longer than traditional incandescent lights [source: EnergySavers.gov].

CFLs are those expensive twisted bulbs some of us now use. Yes, they are more expensive than traditional bulbs, but CFLs are long-lasting and usually pay for themselves in less than nine months. An ENERGY STAR-CFL uses a quarter of the electricity of a traditional bulb, saving you 75 percent [source: EnergySavers.gov].

When it comes to saving energy, LEDs are the gold standard of home lighting. Instead of using a gas to emit light -- as CFLs and incandescent bulbs do -- LEDs light up when electrons move around a semiconductor. It's the same technology as the lights on a cell phone, microwave and cable box. LEDs last 25 percent longer than Thomas Edison's invention, and generate between 75 and 80 percent in savings [source: EnergySavers.gov].