by Sarah Winkler
Prev NEXT
4 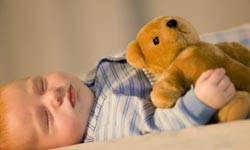 The teddy bear has been a favorite among children for over a century. Named for President Theodore "Teddy" Roosevelt after an unsuccessful bear hunting venture, the teddy bear made its debut in Brooklyn during the holiday season in 1902. Almost at the very same time on the other side of the world, the Steiff Company in Germany began to manufacture toy bears. On both sides of the Atlantic, the toy was an instant hit and has remained one of the most popular toys for children. Some hospitals and police patrol cars are even equipped with teddy bears to help children cope with traumatic situations.

The teddy bear is such an unforgettable toy for children because it has a universal appeal. It's gender neutral, and the softness of the teddy bear makes it an appropriate toy for children of all ages. When choosing a teddy bear for your child, select a well-made bear that will stand the test of time. Even though children might outgrow them, I'm sure many adults would admit to hanging onto a teddy bear or other plush animal toy into adulthood.