Slow Down and Lay Low 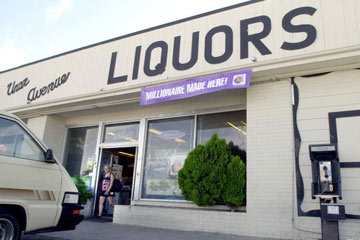 The store where Al bought the ticket. To maintain an appearance of normalcy before coming forward, he dropped by as usual.
Justin Sullivan/Getty Images

Because the Castellanos won the largest single jackpot in California's history, they were instantly sought by the media. Fortunately, no one knew who had the winning ticket, so the media had no one to hound. This proved to be an intelligent move.

The family hunkered down in their home for five days, creating their plan with their children and only a few trusted others who they determined could help them. While they planned, they also tried to appear as normal as possible. The neighborhood children who played with their grandkids came over as usual. Al went to the store where he bought the winning ticket as he normally did and chatted with the owner, who was unaware he was speaking with the winner. As a precaution, the family parked their cars several blocks away so they could make a getaway if their winning status leaked.

And when they cashed in their ticket, they opted for the quietest locale. "We went to an out of the way lotto office," said Carmen, "because we knew the media would be waiting at the nearest lotto office."

By remaining out of sight and quiet until they had all their ducks in a row, the Castellanos was able to step out to accept their winnings on their own terms.