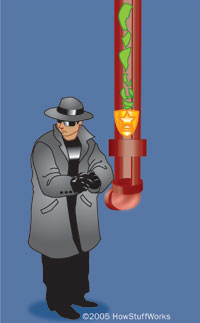 It's a daunting task to trace the origins of any deposit when there are many hundreds of thousands of global wire transfers equaling trillions of dollars occurring every day [source: U.S. Dept. of Treasury]. Which is the dirty money and which is the clean stuff? Within the United States, there are two primary methods employed by the government to detect and combat money laundering: legislation and law enforcement.

The United States addresses the crime of money laundering in countless legislative acts. Here are just a few of them:

The Bank Secrecy Act (1970) basically eliminates all anonymous banking in the United States. It gives the Treasury Department the ability to force banks to keep records that make it easier to spot a laundering operation. This includes reporting all single transactions above $10,000 and multiple transactions totaling more than $10,000 to or from a single account in one day. A banker who consistently violates this rule can serve up to 10 years in prison.

The 1986 Money Laundering Control Act makes money laundering a crime in itself instead of just an element of another crime, and the 1994 Money Laundering Suppression Act orders banks to establish their own money-laundering task forces to weed out suspicious activity in their institutions. The 2001 U.S. Patriot Act sets up mandatory identity checks for U.S. bank patrons and provides resources toward tracking transactions in the underground/alternative banking systems frequented by terrorist money handlers. In 2004, the government extended the reach of the Bank Secrecy Act to include cross-border electronic transactions [source: FCEN].

In addition to legislation intended to detect a money-laundering operation, undercover stings are also a component of the fight. The DEA's Operation Juno, which ended in 1999, is a prime example. The DEA out of Atlanta conducted a sting operation that involved providing resources to drug traffickers to launder money. The undercover DEA agents made deals with the traffickers to turn drug money from dollars to pesos using the Colombian Black Market Peso Exchange. The operation ended with 40 arrests and the seizure of $10 million in drug proceeds and 3,600 kilograms of cocaine.

Despite these victories, the truth is that no individual nation has the power to stop money laundering — if one country is hostile to laundering, criminals simply look elsewhere for a place to clean their money. Global cooperation is essential. The most prominent international organization in this respect is probably the Financial Action Task Force (FATF). The FATF issued the "40 Recommendations" for banks (there are actually 49 now, but the moniker hasn't changed) that have become the anti-money-laundering standard. These recommendations include:

The "recommendations" are really more like rules than friendly tips. The FATF keeps a list of "uncooperative countries" — those who have not enacted the recommendations. The FATF encourages its member states not to deal with those countries in financial matters.

Other global organizations fighting money laundering include the United Nations, the International Monetary Fund, the World Bank, and smaller groups like the Caribbean FATF and the Asia/Pacific Group on Money Laundering.

While increased worldwide efforts are making a small dent in the money-laundering industry, the problem is huge, and the money launderers are winning overall. Countries with bank-secrecy rules, which arguably have legitimate benefits to the honest depositor, make it extremely hard to track money once it's transferred overseas. Still, more than 190 jurisdictions worldwide have signed up to follow the FATF's Recommendations. The organization's list of "High-risk and other monitored jurisdictions" counts just 10 countries (Serbia, Tunisia, Ethiopia, Syria, Yemen, Iran, Pakistan, Sri Lanka and North Korea) [source: FATF].