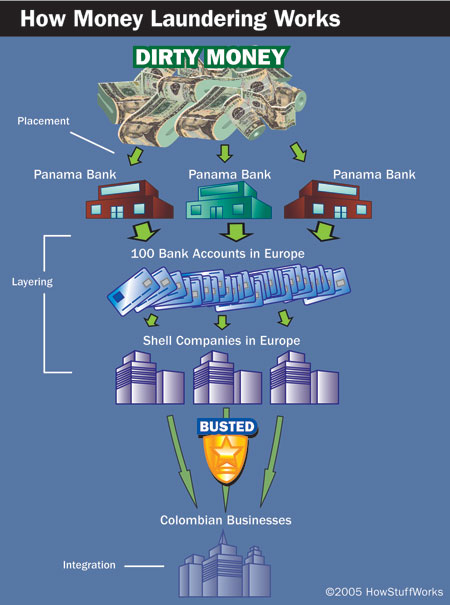 In the late 1980s and early '90s, Harvard-educated economist Franklin Jurado ran an operation to launder money for Colombian drug lord Jose Santacruz-Londono. His was a very complex scheme. In its simplest form, the operation went something like this:

In total, Jurado funneled $36 million in drug money through legitimate financial institutions. Jurado's scheme came to light when a Monaco bank collapsed, and a subsequent audit revealed numerous accounts that could be traced back to Jurado. At the same time, Jurado's neighbor in Luxembourg filed a noise complaint because Jurado had a money-counting machine running all night. Local authorities investigated, and a Luxembourg court ultimately found him guilty of money laundering. When he'd finished serving his time in Luxembourg, a U.S. court found him guilty, too, and sentenced him to seven-and-a-half years in prison [source: UN General Assembly].

When authorities are able to interrupt a laundering scheme, it can pay off tremendously, leading to arrests, dirty money and property seizures and sometimes the dismantling of a criminal operation. However, most money-laundering schemes go unnoticed, and large operations have serious effects on social and economic health.