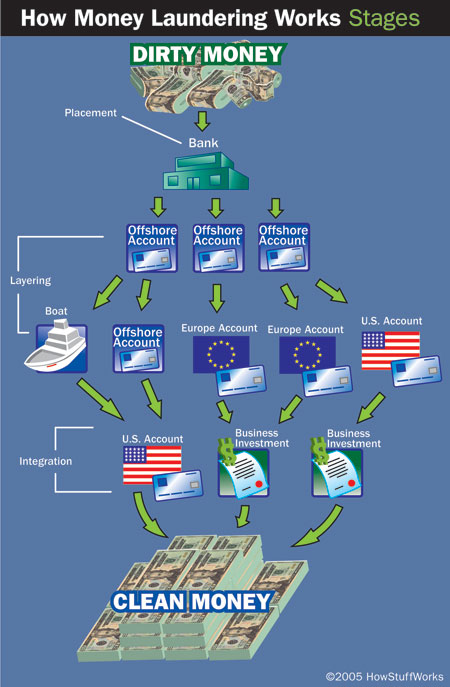 The most common types of criminals who need to launder money are drug traffickers, embezzlers, corrupt politicians and public officials, mobsters, terrorists and con artists. Drug traffickers are in serious need of good laundering systems because they deal almost exclusively in cash, which causes all sorts of logistics problems. Not only does cash draw the attention of law-enforcement officials, but it's also really heavy. Cocaine that's worth $1 million on a New York street weighs about 70 pounds (30 kilograms), while a stash of U.S. dollars worth $1 million weighs about 256 pounds (116 kilograms).

Money laundering is a crucial step in the success of drug trafficking and terrorist activities, not to mention white collar crime, and there are countless organizations trying to get a handle on the problem. In the United States, the Department of Justice, the State Department, the Federal Bureau of Investigation, the Internal Revenue Service and the Drug Enforcement Agency all have divisions investigating money laundering and the underlying financial structures that make it work. State and local police also investigate cases that fall under their jurisdiction. Because global financial systems play a major role in most high-level laundering schemes, the international community is fighting money laundering through various means, including the Financial Action Task Force on Money Laundering (FATF), which as of 2018 has 37 member states and organizations. The United Nations, the World Bank and the International Monetary Fund also have anti-money-laundering divisions.