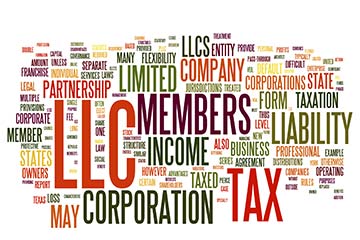 LLCs can be C corporations, S Corporations, single-member or other permutations.
MacXever/iStock/Thinkstock

It's often preferable to have your multi-owner LLC treated as a C corporation for tax purposes. It can save you big bucks, which means you can use more of your profits to reinvest in your company and its growth. Unlike regular LLCs, corporations are considered by the IRS to be separate tax entities from the owners. Thus, a C corporation pays its own federal and state taxes; the money is not run through the owners' individual income taxes. This means business owners are not subject to self-employment taxes, which can be a great savings.

In addition, C corporation profits can be distributed in cash to owners as dividends or W-2 wages (money earned from an employer), assuming the person is performing legitimate, business-related work. W-2 wages are generally the preferred method, since the recipient is only taxed once on his wages. Dividends, however, are double-taxed; they're taxed first as part of the LLC's corporate income, and then again on the owner/shareholder's income tax return when they're handed out. So it's helpful that a C corporation can pay out some of its profits via wages [sources: Akalp, Entrepreneur].

Until 2017 in the U.S., tax law stipulated that the first $50,000 of an LLC's profits be taxed at the beginning federal corporate tax rate of 15 percent. The rates then increased depending on the amount of profits, all the way up to a tax rate of 35 percent. However, thanks to the Tax Cuts and Jobs Act (TCJA) of 2017, starting with tax year 2018, all corporations are taxed at a flat rate of 21 percent [source: Murray].

Let's look at one scenario to see the tax difference between operating as a C corporation and as a pass-through entity. Ed and Bob own a graphic design LLC that earns a profit of $75,000. They each own 50 percent of the business. If their company is operating as a multi-owner LLC, or partnership (these are pass-through entities), they would each record $30,000 on their personal income taxes, assuming they could each take the full 20 percent deduction. If they both filed as single people, they'd each owe $3,406 according to year 2019 tax rates (10 percent income tax rate for the first $9,700 and 12 percent on the remaining income), plus 15.3 percent in self-employment taxes ($5,737.50), for a total of $9,143.5 apiece and $18,287 together. That would leave $56,713 of their firm's profits for reinvestment [sources: IRS].

If Ed and Bob operated their business as an LLC functioning as a C corporation, however, no profits would be run through their personal income taxes, and so no self-employment taxes would be levied. Instead, their profits would be taxed at the corporate tax rate of 21 percent. This would result in a tax bill of $15,750, leaving $59,250 for reinvestment [source: Internal Revenue Service]. This example assumes Ed and Bob are leaving all profits in the corporation and not taking any out as W-2 wages or dividends. If they did take some profits as wages or dividends, they'd still have to pay income tax on that.

Of course, how much an LLC earns and how much the owners take for salary could change the direction of these figures and determine which tax structure is better.