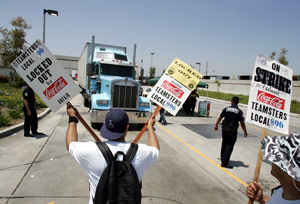 A truck driven by a replacement worker moves Coca-Cola soft drinks to market during a 2005 strike in California.
David McNew/Getty Images

A successful relationship between union laborers and employers relies on a delicate balance of power. Some employers view the right to hire scab labor as a way to maintain that balance. They say that scabs are necessary bargaining chips at the negotiation table to combat unfair union demands.

This argument is hard to swallow for many union workers, but there's a certain logic to it, particularly in the case of smaller businesses [source: Lemay]. Imagine a factory in rural Michigan. Economic times are tough and the factory is barely making a profit. The union, upset that wages haven't increased in years, calls for a strike. Now the company is in an even tougher economic situation. With production at a standstill, it's losing hundreds of thousands of dollars a day, and the only way to get employees back to work is by meeting their demands.

By temporarily replacing union workers, the small company can generate some revenue while negotiations with the union continue. Some of the factory's economic pressure has been lifted, allowing both sides to approach the negotiating table on equal terms.

It can also be argued that the existence of scab labor may actually be a protection for union workers. Let's say that it was suddenly illegal to hire replacement workers -- legislation that's been proposed in U.S. and Canada for years. If you were running that factory in Michigan, you would do everything in your power to limit your exposure to labor unions [source: Lemay]. The more union workers you hire, the greater your risk if they go on strike. And without the option to hire replacement workers, you'll have to bow to the union's demands, even if you feel they're excessive.

The market test theory argues that without the ability to hire permanent replacement labor, unions will exercise a monopoly that raises wages so far beyond fair market value that employers will no longer be able to do business [source: Ferrara].

As we've seen, quite a bit of controversy and risk of physical danger surrounds labor scabs. For lots more information on scabs, strikes and unions, follow the links below.