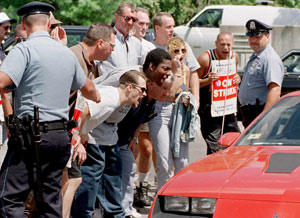 Teamsters yell at scabs as they drive across the picket line during a strike.
John Mottern/AFP/Getty Images

In the late 19th and early 20th centuries, industrial workers around the world reached a breaking point. Frustrated with dangerous labor conditions, low pay and zero job security, they came together to form the first labor unions. Whereas the complaints of one, two or 10 workers could be easily ignored by management, the united voice of thousands of workers demanded attention.

Scab labor has the potential to completely undermine the power of a labor union. The key to a successful strike is that every union member participates. If half of the employees stay behind -- or are replaced by nonunion workers -- management can still keep the factory running and wait until the striking workers are desperate enough to accept its conditions. When scabs fill jobs, the striking worker has two options -- either return to work under the same old conditions or look for a new job.

Scabs, also known as replacement workers, are legal in most parts of the world. In the U.S., the National Labor Relations Act (NLRA) of 1935 establishes strict protections for unions, but allows employers to permanently replace striking workers if the strike is based on economic gain [source: Legal Dictionary]. In a recent case, a 7th Circuit Court ruled that an employer can even refuse to hire back striking workers if their jobs are occupied by permanent replacements, further undercutting the power of strike actions [source: U.S. Court of Appeals]. In the Canadian provinces of British Columbia and Quebec, however, it's illegal under any circumstances to hire scabs [source: Canadian Labour Congress].

Over the past two centuries, scabs have played pivotal roles in some of the world's most famous and most violent labor strikes. Read more about them in the next section.

Some union members consider the employment of illegal immigrants a form of scab labor. The argument is that illegal immigrants sometimes accept jobs at lower wages and with dangerous working conditions, allowing employers to ignore the ­demands of labor unions. The same claim is made against outsourcing. For example, if an employer wants to avoid paying higher wages for union labor, he can send his factory to another country where pay is lower and safety standards may not be the same as those in his country.