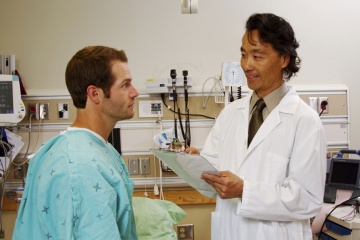 If a clinical trial volunteer isn’t honest during the interview process, it can put him and the trial at risk.
©Trish233/iStock/Thinkstock

During the recruitment process, every human test subject must answer medical questions as well as questions appropriate to the study at hand. They must sign an informed consent form, an up-front document explaining the volunteer's rights and responsibilities during the study, the potential benefits as well as the potential risks of the experimental treatment, and the purpose, details and duration of the study itself, before a clinical trial can begin.

Human trials are ethically difficult to navigate, and while pharmaceutical companies and research units are often an easy target, volunteers sometimes act unscrupulously. There's nothing stopping a candidate from withholding information during the review process or being outright dishonest. For instance, as many as 10 percent of volunteers admit they've participated in simultaneous studies without telling researchers or recruiters. That's a problem because the overlapping experimental therapies may interfere with the final results of the studies (and may increase the risk of serious side effects, too) [source: Newsome]. Among professional test subjects it's common to fudge a medical history or age to appear as an attractive candidates for multiple studies. When being a test subject is your career, the more gigs per year the better the annual income, despite the potential risks.

And here's where things get a little gray -- well, grayer. Just as recently as 20 to 25 years ago, about 80 percent of all biotechnological and pharmaceutical trials were conducted in academic medical settings. Around 2000, though, pharmaceutical companies began to shift from non-profit academia to for-profit research units, and the majority (more than 60 percent) of studies shifted to third-party contract research organizations (CROs) [source: Newsome].

These for-profit companies, as part of the clinical trial process, pay for volunteer recruitment -- think of it like a finders' fee for physicians who recruit patients for appropriate studies. And those who do participate in scouting are paid additionally for their volunteer-recruitment services -- and not pocket change. CROs may offer health care professionals deals such as $12,000 for each patient who enrolls in a study, plus bonuses (including those based on enrollment numbers) [source: Elliott]. So far that adds up to a for-profit clinical trial research unit compensating doctors for their participation in patient recruitment, and then compensating those patients for their participation; a setup many describe as more of a business arrangement than volunteering as an act of kindness or generosity. What many ethicists and regulators would prefer is an arrangement not of monetary compensation and financial benefit -- rife with potential for exploitation -- but rather one with a sense of humanitarianism and altruism on the behalf of those who volunteer.

Author's Note: How much do pharmaceutical test subjects get paid?

There are actually five phases to clinical trials, not four, but phase zero isn't an official stage in trials and not required before clinical testing phase I can begin. It's an interesting stage nonetheless. Phase zero trials are pharmacological studies designed to find out some very basic information about how a drug and human body respond to each other -- for instance, does the drug reach the desired target (such as an organ or tumor)? That's good information to have before beginning years of clinical studies. In this stage, researchers use microdoses of experimental drugs in very small numbers of human volunteers (only 10 to 15 people at most) instead of relying on animal studies. The doses are so small the risk involved here is lower for participants than those in phase I studies.