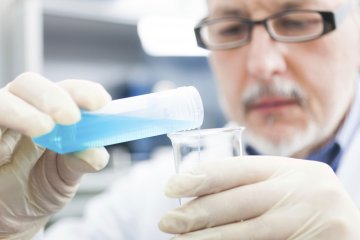 Before phase I testing can even begin, there are hours and hours of lab work.
©Minerva Studio/iStock/Thinkstock

Clinical trials are broken into four phases, and in total one individual study may last for more than a decade. The first phase, which spans about a year, is usually the first time that the treatment under evaluation has been used on humans. The number of participants is kept intentionally small. Generally, between 20 and 80 healthy volunteers are selected to participate at this early stage (rarely, but sometimes, individuals with advanced or untreatable disease may participate in phase I studies, too, depending on the circumstance). Phase I trials are designed to evaluate a drug's toxicity. Researchers use this stage to determine what the drug does to the human body, called pharmacodynamics (Can the body tolerate the drug?), and what the body does to the drug, called pharmacokinetics (How fast is the drug absorbed?). Safe dosage is determined during this phase, and acute effects are also identified and evaluated; there is almost never any therapeutic benefit to treatments tested on phase I participants.

If a drug is successful in phase I, phase II trials begin; and at this stage, patients suffering from the condition being studied are recruited as participants, rather than the healthy volunteers important to phase I. These studies typically last between several months to as long as two years, and are used to determine how well the therapy works in people who would benefit from its effects (its efficacy), and to further evaluate safety and side effects [source: CenterWatch]. Making it to the long-term testing of phase III, however, isn't in the cards for most experimental therapies. Out of every three phase I clinical trials conducted, one therapy will fail. Add in those therapies that fail during phase II studies, and the failure rate in early clinical trials rises to 85 percent [source: Pfizer New Haven Clinical Research Unit, Ledford].

Thousands of patient-volunteers around the world generally participate in phase III clinical trials, which may last over several years. Phase III studies are designed to confirm that the experimental treatment has a clear benefit, and compares it to similar treatments (if, in fact, there are similar treatments). During this phase the drug's side effects are also evaluated. Only about 50 percent of therapies studied in phase III will go on to be granted FDA approval [source: Ledford].

Phase IV of clinical trials happens actually after the therapy has been approved and marketed, and are called Post Marketing Surveillance Trials. This stage focuses on evaluating the drug's long-term benefits and side effects when used in the population at large.