The Founding Fathers of E-commerce 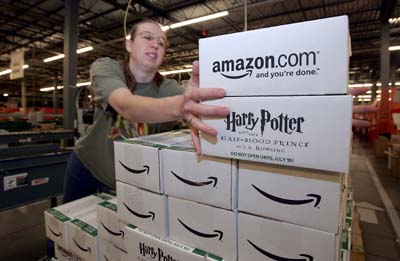 In July 1995, Jeff Bezos boxed up the first book ever sold on Amazon.com from his Seattle garage [source: Amazon.com]. Within its first 30 days of business, the self-proclaimed "Earth's largest bookstore" sold books to online shoppers in all 50 U.S. states and 45 countries [source: Amazon.com].

With Amazon, Bezos tapped into a powerful new e-commerce market. Books, he had realized, were cheap to ship and easy to order directly from publishers. Publishers had already created vast digital archives of their titles on CD-ROM, something that could be uploaded to a Web site [source: Time].

Amazon.com set the standard for a customer-oriented e-commerce Web site. Users could search available titles by keyword, author or subject. They could browse books by category and even get personalized recommendations. They could also purchase books quickly and securely with the patented "one-click" checkout system.

But the most popular Amazon.com feature has always been the reader review option [source: E-commerce Land]. On Amazon, any registered member can write and publish a book review. And other users can rank each review, creating a hierarchy of top Amazon reviewers. Amazon's online community feel -- in addition to the steep discounts on many books -- has contributed to the site's popularity.

Amazon went public in 1997, and as the dot-com boom reached its pinnacle in 1999, Bezos was named Time's "Person of the Year." Amazon has expanded its offerings beyond books. It currently offers music, movies, electronics, toys, home and garden equipment, clothing, jewelry, video games and digital downloads. Amazon runs seven different international Web sites, has distribution and customer service centers in seven countries and employs more than 17,000 people worldwide. Yet despite its growth, Amazon hasn't always been a financial powerhouse: It didn't post its first quarterly profit until 2001 and its first annual profit until 2004 [source: Seattlepi.com]. But in the first quarter of 2008, Amazon announced a profit increase of 33 percent over last year, an impressive achievement in tough economic times [source: Associated Press].

Back in 1995, when Bezos was shipping books from his garage, Pierre Omidyar, a software programmer, started coding a simple Web site he called AuctionWeb. Omidyar was curious if people would use the Internet to bid on each other's used items. Looking around for something to sell, Omidyar picked up a broken laser pointer. Within a day, it had sold for $14.83 [source: eBay]. Omidyar e-mailed the buyer to make sure the guy knew it was broken. The buyer's response? "I'm a collector of broken laser pointers" [source: eBay]. Welcome to eBay.

eBay leveled the e-commerce playing field. You didn't have to be a Web entrepreneur or an existing business to sell things online. All you had to do was raid your attic, post a listing, and there was a good chance that someone, somewhere, would pay money for your old junk. In 1996, with two full-time employees, eBay sold $7.2 million worth of goods. By 1997, with the help of a Beanie Babies frenzy, eBay sold $95 million in goods. In 2007, eBay sold $52.5 billion in auctions, had more than 220 million registered users and 13,000 employees [source: eBay].

Both eBay and Amazon paved the way for today's e-commerce merchant. Consumers can buy almost anything online, including shoes, home goods and even a real shark's tooth. Just type "unusual items for sale" in a search engine, and see what comes up.

For lots more information about e-commerce and related topics, check out the links below.