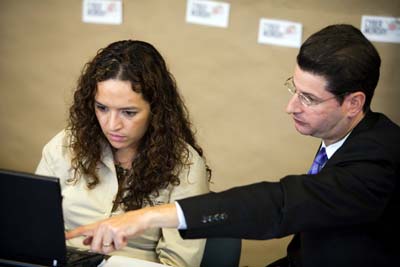 As far back as the 1960s, businesses were using primitive computer networks to conduct electronic transactions [source: 123EDI]. Using something called Electronic Data Interchange (EDI), a company's computer system could share business documents -- invoices, order forms, shipping confirmation -- with another company's computer. In the beginning, each company had its own standards for formatting these documents. But in 1979, the American National Standards Institute (ANSI) came up with something called ASC X12, a universal standard for sharing business documents over electronic networks.

Prior to that, in the late 1960s, the military developed ARPAnet to ensure that crucial communications were circulated in the event of a nuclear attack. The original ARPAnet connected four large U.S. research universities and relied on huge, unwieldy computers. In 1971, researchers developed the Terminal Interface Processor (TIP) for dialing into the ARPAnet from an individual computer terminal [source: ARPAnet]. But the greatest networking evolution came in 1982, when ARPAnet switched over to Transmission Control Protocol and Internet Protocol (TCP/IP), the same packet-switched technology that powers the modern Internet.

By the early 1980s, individual computer users -- still mostly at major research universities -- were sending e-mails, participating in listservs and newsgroups, and sharing documents over networks like BITNET and USENET.

CompuServe was one of the first popular networking services for home PC users, providing tools like e-mail, message boards and chat rooms. In the mid-1980s, Compuserve added a service called the Electronic Mall, where users could purchase items directly from 110 online merchants [source: SmartComputing]. While the Electronic Mall wasn't a huge success, it was one of the first examples of e-commerce as we know it today.

In 1990, a researcher named Tim Berners-Lee at the European Organization for Nuclear Research (CERN, from its French name) proposed a hypertext-based web of information that a user could navigate using a simple interface called a browser. He called it the "WorldWideWeb" [source: NetValley]. And in 1991, the National Science Foundation lifted a ban on commercial businesses operating over the Internet, paving the way for Web-based e-commerce.

In 1993, Marc Andreesen at the National Center for Supercomputing Applications (NCSA) introduced the first widely distributed Web browser called Mosaic. Netscape 1.0's release in 1994 included an important security protocol called Secure Socket Layer (SSL) that encrypted messages on both the sending and receiving side of an online transaction. SSL ensured that personal information like names, addresses and credit card numbers could be encrypted as they passed over the Internet.

In 1994 and 1995, the first third-party services for processing online credit card sales began to appear [source: Keith Lamond]. First Virtual and CyberCash were two of the most popular. Also in 1995, a company called Verisign began developing digital IDs, or certificates, that verified the identity of online businesses. Soon, Verisign switched its focus to certifying that a Web site's e-commerce servers were properly encrypted and secure.

Now let's take a closer look at the two companies that transformed e-commerce in the mid-1990s: Amazon and eBay.