Positive and Negative Effects of Gentrification 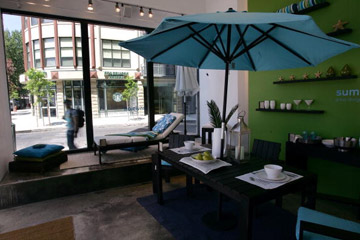 A summer patio set on display in a storefront in the Brooklyn neighborhood known as DUMBO (Down Under the Manhattan Bridge Overpass), now one of New York's hottest areas due to gentrification.
Spencer Platt/Getty Images

Gentrification is a sign of economic growth. As money begins to flow into a neighborhood, many aspects of everyday life are changed for the better. Buildings and parks are renovated and beautified. Jobs arrive with the increased construction activity and new retail and service businesses. Crime rates decline. As the property tax base increases, so does funding to local public schools. Formerly racially homogenous neighborhoods get an influx of diversity. There are many things to applaud about the power of gentrification.

But the questions posed by critics of gentrification are, "Are the benefits of economic growth shared equally by new and old residents alike?" and "What is the social cost of economic growth?" These two queries raise a host of others, such as: Do wealthier new arrivals reap the majority of the benefits of increased economic activity? How does the arrival of new tastes, expectations and demographics damage the social and cultural fabric of a neighborhood?

The standard picture of gentrification is that the new arrivals benefit greatly from gentrification at the expense of lower-income residents. The new arrivals get affordable, stylish housing and all of the expensive accoutrements of life in a trendy urban neighborhood (boutiques, bookstores, coffee shops, clubs and more). While long-time residents may benefit initially from cleaner, safer streets and better schools, they are eventually priced out of renting or buying. As the new arrivals impose their culture on the neighborhood, lower-income residents become economically and socially marginalized [source: Grant]. This can lead to resentment and community conflict that feeds racial and class tensions [source: Atkinson].

While this picture of gentrification is undeniably true in some cases, the data shows that the economic benefits of gentrification spread beyond the white interlopers. In 2008, researchers from University of Colorado at Boulder, University of Pittsburgh and Duke University used census data to measure the total income gain in gentrified neighborhoods over a select period of time. Interestingly, the demographic group that contributed the largest percentage to that income gain was black residents with high-school diplomas. That group contributed 33 percent of the total income gain, while college-educated whites only brought in 20 percent [source: Kiviat].

Even if the economic disparities aren't as stark as they may seem, a lingering complaint about gentrification is that it destroys the "soul" of a neighborhood [source: Coster]. The gritty character, ethnic diversity and eclectic spirit that attracted the initial urban pioneers is overtaken by chain stores, overpriced brunch menus, iPad-tapping hipsters and stroller parking at the corner bar. Those are the kind of palpable social effects that can't be quantified by statistics, but feed a growing disdain for gentrification and gentrifiers.

For lots more information about real estate, affordable housing and sustainable development, head to the links on the next page.