Is There a Family Gap? 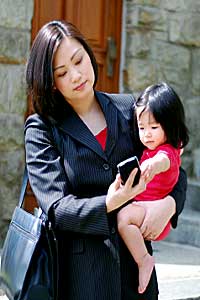 ­Statistically, men spend more time at work than women. However, concluding that men labor longer overall is incorrect. A study published in 2007 surveyed people's work habits in 25 countries, finding that men and women put in the same amount of time per day -- but for different types of work [source: Burda, Hamermesh and Weil]. Women log more hours than men working at home, and men perform more work for pay.

Domestic labor and childcare have long been sticking points in the fight to close the gender gap. By 2006, 70.6 percent of women with children under 18 were part of the labor force [source: U.S. Department of Health and Human Services]. But motherhood may limit a woman's career trajectory and resulting income more than that of women without children. That dividing line has been referred to as the family gap. Consider, for instance, that of 160,000 Ph.D. recipients in the United States, 70 percent of males were tenured professors and married with children; only 44 percent of females reported the same domestic situation [source: Angier]. The aging baby boomer population has intensified that situation for some American women, with an estimated 44 percent caring for one living parent and at least one child under 21 [source: Pierret].

Studies in the late 1990s in the United States and Britain confirmed that having children impacts pay. One study attributed 40 to 50 percent of the gender wage gap to childbirth [sources: Waldfogel]. Another study determined that American women experience a 7 percent wage penalty per child, resulting from factors such as skill loss, reduced work hours or outright discrimination [source: Budig and England]. However, a 2005 analysis of college-educated women who waited to have children after 30 found no such wage penalty [source: Amueo-Dorantes]. Therefore, higher education and delayed motherhood could alleviate the gender gap.

­Employers legally cannot compensate men and women differently for the same work, according to the 1963 Equal Pay Act. Title VII of the Civil Rights Act also barred gender-based hiring and established the Equal Employment Opportunity Commission (EEOC). But even with the legal floodgates opened for women to enter the workforce, research indicates that it hasn't eliminated all major hurdles for women in the workplace. Reams of data point to compensation discrepancies among men and women, but not in quality of work. For that reason, until that gap turns into a sliver and finally disappears, it will continue to resurface as a source of discontent among women workers.