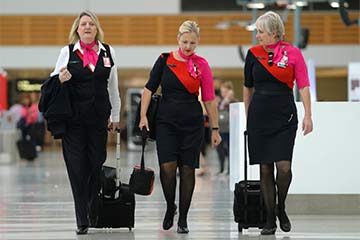 Flight attendants are the unsung heroes of the airline industry. Pilots may get you where you're going, but everyone knows that attendants are the serious muscle behind in-flight operations. More people are flying the friendly skies than ever before, and the upward passenger trend is expected to continue for the foreseeable future, according to U.S. Federal Aviation Administration projections. This apparent job stability is excellent news for current and prospective flight attendants.

The image of flight attendants has changed dramatically over the years. In the 1930s and '40s, most had nursing backgrounds – plane travel being more turbulent then than now. In the 1960s and '70s, there was the "sexy stewardess" image, and many uniforms featured miniskirts or hot pants [source: AvStop]. What both eras shared was the requirement that attendants could not be married, have children or even weigh over a certain amount. For many airlines, even if you managed to avoid those potential career-ending pitfalls, you'd still be unceremoniously dumped on or around your 32nd birthday for having the sheer nerve to age [source: Ganzer].

Disparities and all, the profession enjoyed its peak in mystery and excitement in those earlier days, when flying was a rare, exciting treat – if you got to do it at all. "People looked at us as if the job was special and we were special," says Candy Bruton, a 43-year flight attendant veteran with a major airline.

Flight attendants and women's rights advocates fought back against age, marital and weight discrimination (the weight requirements were only lifted in the 1990s), and as a result the career path has become less about image and more about providing important, necessary services. Men have also joined the ranks of the profession – perhaps "rejoined" might be more accurate since airlines hired "cabin boys" or "stewards" in the earliest days of airline travel in the 1920s.

However, there are still some pretty strict standards in place to land a spot within this in-demand profession. Requirements vary by airline, but for instance at SkyWest, flight attendants can't have visible tattoos, outlandish hair styles (including color) or excessive piercings. Candidates must be tall enough to manage the overhead bins, but still short enough to comfortably perform tasks on the aircraft - generally between 5 and 6 feet, or 1.5 and 1.8 meters, in height. Attendants should also be able to handle a reasonable amount of physical exertion (walking, closing heavy doors and pushing beverage carts) and be physically able to be fastened into a jump seat, which features a shoulder harness and seat belt.

A high school diploma or GED is required, but the industry has become so competitive that a college education will often boost hiring odds in your favor. So will speaking a second language. Of course, customer service skills are a must. Let's face facts here – if you can't resist the urge to throw a Diet Coke in a difficult passenger's face, the job is probably not for you!

A Day in the Life of a Flight Attendant 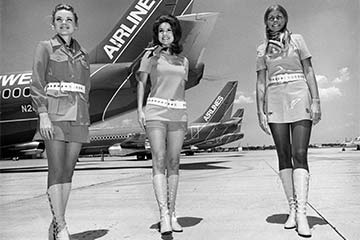 A flight attendant's job goes far beyond picking up trash and doling out beverages, although both are vitally important to the in-flight experience. Customer service and safety are the cornerstones of the flight attendant role, but both have grown more complicated in recent years. "Ever since 9/11, the entire system has changed, and we had to go to a much more secure and detailed process to board, which added a lot of layers," explains Bruton. "Our knowledge base has also increased immensely to make things even safer, and we go through training every single year that you have to perform and pass in order to be able to fly." Bruton also notes that major airlines fly virtually everywhere in the world nowadays, making cultural training a must to avoid issues and misunderstandings.

In addition to demonstrating safety procedures (or being available for questions when the video is showing), flight attendants must also verify the presence of safety equipment and ensure that passengers adhere to regulations, like stowing possessions properly and wearing their seat belts. Also of paramount importance is the ability to assist passengers in emergency situations, from mild turbulence to a passenger's heart attack to an impending plane crash; hence all the mandatory annual training.

From a customer service perspective, the goal is to keep passengers as happy as possible despite the ever-shrinking legroom, seats, and food and beverage options available to ticket-holders. Often, they're crabby before they even board, making it even more important for flight attendants to flaunt excellent customer skills. "People used to get excited when they went on a trip," recalls Kate Linder, a flight attendant with United Airlines since 1978. "Now going through the airport is such a hassle that by the time they get through security they're exhausted."

Overnight trips are common and expected, particularly for newer flight attendants who have less control over their schedules. Seniority determines everything in the flight attendant world, and the people who've been there the longest get first dibs on bidding for routes they wish to work. The typical flight attendant works 75 to 85 hours a month, but many will volunteer to work extra shifts to increase their pay. The maximum number of hours allowed is usually 100 per month [source: Flight Attendants Academy].

The Fight Against Human Trafficking

Training has increased in recent years to help flight attendants identify and report suspected cases of human trafficking. The hope is that their ability to observe passengers and recognize potential crimes-in-progress will help prevent adding to the estimated 12.3 million enslaved adults and children. Some of the warning signs of trafficking include an adult traveler restricting the movement and interaction of a minor and an adult traveler who seems unclear about his final destination [source: AFACWA].

Perks of Flying for a Living 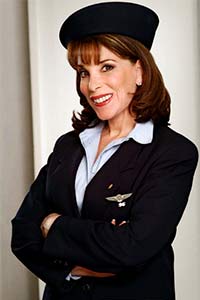 Kate Linder, a star of the TV soap opera 'The Young and the Restless' has kept her other job as a flight attendant. She finds the dual careers keep her grounded.
CBS-TV

The travel benefits for flight attendants are notoriously awesome, with free and reduced flights available to employees, immediate family members and sometimes even friends and extended kin [source: Delta]. I've known flight attendants who regularly pop over to exotic locations just because they can, and workers on international flights sometimes enjoy significant layovers, during which they can sightsee and socialize with the locals. "We've learned that the tiniest cities are just as much fun as the big hubs because there's always something to discover," says Candy Bruton, the 43-year vet.

Don't go hitting up a new attendant for a buddy pass too quickly, though. Many airlines keep 'em on probation for about six months before travel perks kick into action [source: Poole].

Although free travel is arguably the sweetest and most quantifiable perk for flight attendants, flexibility is another major bonus, particularly for parents and people who have other demands on their time.

"I needed a job that would give me money coming in, but enough time off that I could pursue my acting career," recalls Kate Linder, who has simultaneously worked as a flight attendant and acted on the popular soap opera "The Young and the Restless" for more than 32 years. "The job does give you the flexibility to do other things. I can fly on the weekends and still be home to do personal appearances, auditions and act." Linder enjoys regularly interacting with shocked fans on her flights, as well as the way that maintaining the contrasting dual careers keep her grounded. "One day I'm on the set playing Esther [Valentine], another day I'm doing a film, then the next day I'm up at 35 thousand feet serving coffee," she explains. "You don't forget who you are that way."

Bruton echoes the sentiment of the position as the ideal career for working parents. "I was able to go to school and fly and still tend to my family," she says. "That's an amazing amount of flexibility."

It's also a great gig for people who aren't keen on the standard 9-to-5 workday. "I love not driving to an office every day, and the hours change from trip to trip," says Kellie*, an attendant with a major carrier for more than a decade. She points out that flight attendants get to positively impact passengers' lives, via short, sweet connections. "You get to help them and send them along on their way."

Drawbacks of Flying for a Living 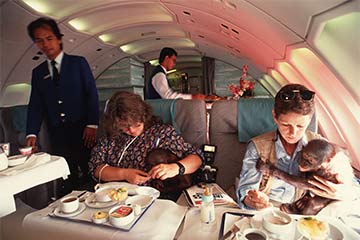 Flight attendants watch as baby orangutans, that were smuggled out of Borneo, are returned first-class on Garuda Airlines to Jakarta from Bangkok. Flight attendants have to be prepared for all kinds of situations.
Peter Charlesworth/LightRocket via Getty Images

Even the most plum positions have their pitfalls. Some of the drawbacks of life as a flight attendant are obvious. Hours are typically long (up to 14 hours a day), with night, weekend and holiday work virtually guaranteed. Until you've gained significant seniority, the pay is usually not going to support your Jimmy Choo habit. In 2012, the median annual salary for flight attendants was around $37,000, with seniority playing a major role in higher wages and benefits [source: Bureau of Labor Statistics]. "Right now airlines are doing great, so we're getting pay raises and profit sharing," says Kellie. "But there are times when we have to take pay cuts and keep the company afloat."

At United Airlines, the hourly rate for a first-year attendant working domestic was $21.23 in 2014 [source: Flight Attendants Academy]. And that only applies to flight time. You know the period right before takeoff where the attendants are walking the aisles, prepping the cabin for departure? Yeah, they're not getting paid (much) for that. They do receive a small per diem for these tasks (United's is $1.95 per hour), but they don't start making their full wages until the plane actually pushes back from the gate. As a result, delayed flights actually cost them quite a bit of cash, so try not to get too snippy the next time you're stuck on the tarmac! Attendants don't like it any more than the passengers.

Another drawback is dealing with ultra-cramped work spaces, including the areas where attendants prepare food and beverage carts, the bathrooms and the aisles, which always seem to be junked up with errant feet and carry-on items. Mild turbulence and dry air, which can seriously wreak havoc on sensitive sinuses, are other annoying, but usually manageable environmental work aspects [source: SkyWest].

Although most flights go off easily enough, the occasional passenger makes life tougher on flight attendants. Bruton recalls a particular incident in which a passenger was served a problematic quantity of red wine before boarding the plane. "He was underage, unbeknownst to us, and he eventually did vomit all over the lavatory," she said. "We actually gave him clothing and washed his clothes out for him, and then one attendant walked him out to his parents and explained what had happened." That is quite literally a case of going above and beyond the call of duty. No one gets paid enough for that kind of cleanup!

Free travel, flexibility and all the peanuts I can eat? If my career as a freelance writer ever hits the skids I'll be the first person in line at the airport employment counter!

How to Answer the Dreaded Question 'What Are Your Salary Requirements?'
How Professional Gaming Works
How the Peter Principle Works