Keynes and the Leisure Society 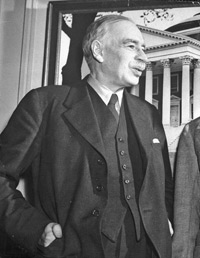 Economist John Maynard Keynes is credited, along with Adam Smith and a few select others, with founding modern economics. Keynes provided the foundation for macroeconomics, the study of economies on the whole, including interest rates, employment, budgets and many other factors. Keynes revolutionized economics and its forecasts, and when he made the predictions in his 1930 essay, "Economic Possibilities for our Grandchildren," people listened.

In "Economic Possibilities," Keynes posits that by 2030, developed societies will be wealthy enough that leisure time, rather than work, will characterize national lifestyles. He uses a realistic estimate for growth -- 2 percent per year -- and pointed out that with that growth the "capital equipment" in the world would increase seven and a half times. With a world as wealthy as this, he said, "We shall do more things for ourselves than is usual with the rich to-day [sic], only too glad to have small duties and tasks and routines" [source: Keynes].

While Keynes was correct in his estimate of increasing world wealth, he missed the mark with his prediction of leisure time. With fewer than 23 years before Keynes' 100-year forecast is up, today economists wonder why we don't have the life of leisure Keynes envisioned.

In a HowStuffWorks interview, Cornell University economist Robert Frank explained his belief that Keynes' failing was his underestimation of the value of relative needs. Frank has contributed to "Revisiting Keynes," a book of economic essays exploring where Keynes went wrong in his prediction. In contrast to basic needs (like food and health care), relative needs are goods and services that people don't need, but want, and often because of rivalry with others. That could be why you feel that you need a bigger SUV than your neighbor or a better television than your brother.

Relative needs don't have to be frivolous, though. Frank says the pursuit of a nicer house in a better school district and a better suit for a job interview are also relative needs. While neither are necessary for survival, both may help people advance in society.

Another factor is the growing gap in American economic classes. This, coupled with equal exposure to the media (meaning both rich and poor alike are aware of the value of a good school district), and the ability to increase the chance of purchasing a nicer house by working longer hours, has resulted in more time at work, encouraging 21st-century Americans to put more time in on the job.

Harvard University economist Richard Freeman -- also a contributor to "Revisiting Keynes" -- believes Keynes overestimated the human desire for leisure. He says economists generally believe that labor and management reached an optimal arrangement with the establishment of a five-day work week and an eight-hour work day. This would certainly account for the boredom that sometimes comes with a lengthy break from work.

He also points out that the modern American workplace is designed to foster more time spent at work. Hard work can lead to promotions, which means more money. This, in turn, inspires them to compete with one another, even after they've left the office.