How the Friends of the Five Day Weekend See It 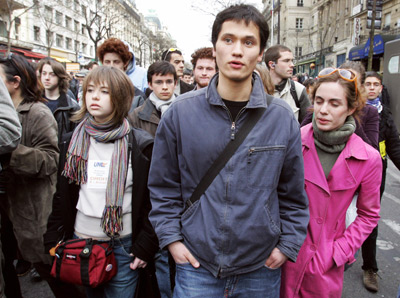 Labor unions, like this student union in France shown striking in 2006, were instrumental in securing a shorter work week in industrialized nations in the early 20th century.
Jack Guez/AFP/Getty Images

So how would the Five Day Weekend work? Congress could pass an amendment creating a two-day work week, as it did when it with the Fair Labor Standards Act of 1938 (FLSA). This bill established the work week Americans currently use -- five eight-hour work days per week, with Saturday and Sunday set aside for free time. This act abolished child labor, established a minimum wage and set the maximum work week at 44 hours. After nearly a century of debate and conflict between business and labor, the act served to end the incredibly long workdays and weeks of the Industrial Revolution.

But after 70 years under the FLSA, the American worker is actually working more again. With three extra days of leisure time, Americans could conceivably engage in all sorts of higher pursuits. The 5DW also suggests more time off would result in higher productivity and job satisfaction. For the organization's vision to work, however, employees would have to complete five days of work in just two days, and employers would have to pay based on productivity, rather than hours.

Can people cram five days of work into two? Perhaps. British economist C. Northcote Parkinson says that "work expands so as to fill the time available for its completion" [source: ­­Parkinson]. Parkinson's Law is an "unnatural law" like Murphy's Law and the Peter Principle -- these are observations, not actual laws of nature. Parkinson's Law is hardly scientific, yet anyone given a week to complete a one-day job is most likely familiar with its validity.

The 5DW also claims that the technology available to Americans is more than sufficiently advanced to allow them to work less. But while technology has advanced by leaps and bounds since the World War II, Americans are working more. "Workers in the U.S. have been punching in more days each year since World War II," writes the organization, "but our free time hasn't expanded since the weekend was created in the 1930s" [source: FiveDayWeekend.org].

One solution may be to give American workers more vacation time. Harvard University economist Richard Freeman points out that in many European countries four weeks of vacation per year is often the norm, and workers all take time off together. “[Europeans] seem to be happy with it, and I can’t imagine they’re that much different than us,” he says. But many American workers leave their vacation days unused, as Harris Interactive poll determined.

Having extra leisure time away from work could have sweeping benefits for society. People don't use many of their non-working hours for relaxation -- they have to catch up on their personal chores first. Little time is actually spent engaged in "leisure" as economists Valerie A. Ramey and Neville Francis define it: "those activities that give direct enjoyment" [source: Ramey, Francis]. In a video on the Friends of the Five Day Weekend site, Roy McCrery, campaign director for the 5DW, says "People have forgotten that work isn't their lives. They've forgotten what their lives are" [source: FiveDayWeekend.org].

This kind of mentality actually takes a toll. A 2000 joint study between the University of Pittsburgh and the State University of New York - Oswego found that -- among middle aged men at risk for coronary heart disease -- less vacation time equals an increased chance of death [source: Gump, Matthews].

Interestingly, as new as the five-day weekend concept may seem, the Asheville CVB isn't the first to suggest that Americans should have reached the leisure life by now. So why haven't they? Read on to find out about the ever-elusive life of leisure.