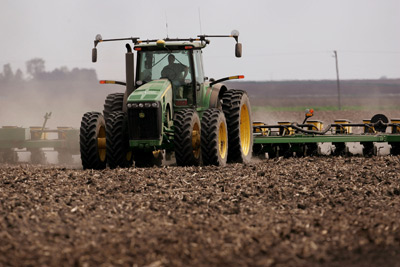 A farmer engaged in the "worst mistake in human history"?
Scott Olson/Getty Images

In his 1987 essay, "The Worst Mistake in the History of the Human Race," anthropologist Jared Diamond discusses the amount of leisure time that was available to people more than 10,000 years ago when they lived in tribes of hunter-gatherers. After studying modern hunter-gatherer societies, Diamond found that they work between 12 and 19 hours per week. The rest of their time is dedicated to leisure.

With the advent of agriculture around 10,000 years ago, however, humans' lives became more labor-intensive. People settled in one place to maintain their crops. This eventually allowed epidemic diseases to take hold, ruling classes to evolve, and systems of money (and debt) to develop. In short, Diamond postulates, becoming an agriculture-based species was "the worst mistake in human history" [source: Diamond].

About 20 percent of Americans made their living from agriculture in 2007 [source: American Farm Bureau]. In 2006, American workers in all professions logged an average of eight hours per work day, and 35 percent of Americans reported working on holidays or weekends [source: Bureau of Labor Statistics]. All of this work created a gross domestic product (the sum total of the value of all the goods and services produced in a year) of more than $13 trillion in 2006 [source: Bureau of Economic Analysis]. That number reflects a lot of long hours, and Americans don't play as hard as they work. In 2006, Americans took only an average of 10 of the 14 vacation days given to them by employers. A Harris Interactive poll conducted for Expedia.com found that a total of 574 million vacation days went unused by American workers in 2006 [source: Expedia].

One group is fighting to change these statistics (well, sort of). Friends of the Five Day Weekend (5DW), a movement born out of the Asheville, N.C. Convention and Visitors Bureau, has created a petition asking the United States Congress to create a constitutional amendment guaranteeing a five-day weekend to American workers. Sound like a joke? It is -- somewhat.

The five-day weekend movement grew out of an April 2007 tongue-in-cheek marketing campaign to bring more tourism to Asheville. But the idea caught on, and by the following August, rallies were being held in cities around the Southeastern United States to support the proposed amendment. Sixty-five hundred people signed the petition, which was passed along to Congress for consideration. The organization also sent the petition to all of the presidential challengers in the 2008 election.

While it has its supporters, there are also plenty of critics of the five-day weekend. "This idea is ridiculous," wrote entrepreneur Donald Trump on his blog [source: Trump Blog]. Ridiculous or not, the concept is a far-out solution to a serious issue facing Americans: overwork. A February 2007 Conference Board survey found that fewer than 50 percent of Americans were happy with their jobs. This is in contrast to the 61 percent job satisfaction reported in 1987. A 2004 study by the Families and Work Institute found that one-third of American workers feel overworked.

The Asheville CVB says it has the solution to alleviate overwork and job dissatisfaction, but how would a five-day weekend work? Read the next page to find out the details of this grand plan.