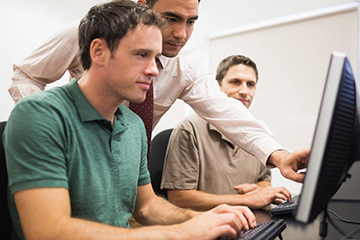 More than 300 U.S. institutions now have permits from the Federal Aviation Administration to fly UAVs for teaching and reseach purposes. Students might accumulate some debt in school, but they're likely to land high-paying jobs as soon as they get out.
Wavebreakmedia Ltd/Wavebreak Media/Thinkstock

Pick a disaster, any disaster. 9/11? Katrina? Fukushima? As rescue crews struggle through the rubble, miniature helicopters equipped with cameras zip up and down ruined buildings and in and out of wreckage too dangerous or difficult for humans to reach quickly. Use of robots like these has resulted in a nine-fold improvement in the performance of rescue teams at disaster sites. And the person you will often find at the controls for one of those helicopters is Dr. Robin Murphy. Founder of the Center for Robot-Assisted Search and Rescue (CRASAR) at Texas A&M University, Murphy is one of the leaders in the field of disaster relief robotics. Her CRASAR center has been directly involved in numerous disaster relief operations since its founding [source: CRASAR].

Murphy is also a teacher at A&M where she mentors graduate students through the school's computer science program. A&M is one of 358 U.S. public institutions, including 14 universities and colleges, that have an FAA permit to fly UAVs for the purposes of teaching and research. Some of them, including several community colleges, have drone pilot training programs, but only three schools offer degrees in the field: Kansas State University, the University of North Dakota and Embry-Riddle Aeronautical University. The programs don't just feature extensive flight simulation — at Embry-Riddle, for instance, students must also accumulate 13 credits in engineering to ensure they understand the drone system inside out [source: Raftery].

One recent graduate from the Kansas State program racked up $60,000 in student loans, but then immediately walked into a six-figure job with the military [source: Raftery]. While this graduate said he hopes to find work in the civilian market eventually, for now, the jobs are all with the military; there isn't really an official civilian drone pilot market yet.

Universities and other institutions are starting to offer training programs because they're expecting a massive boom in the use of commercial drones. In fact, everybody who knows anything about drones is anticipating this boom. They're just waiting for the FAA to make it legal.