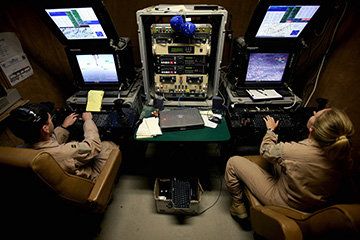 Two young men sit in a dark, smelly room in the Nevada desert. They're looking at the image of a mud hut somewhere in Afghanistan. At their fingertips are the controls to a powerful, unmanned aerial vehicle (UAV) that's hovering unseen in the skies high above the hut. They've been looking at this little house for hours, and nothing has moved except for a few goats. Finally, they're told that an intelligence source has determined there's an insurgent inside and they need to destroy the place. Placing a laser on the corner of the hut, they release a Hellfire missile from the UAV. A split second later they see something dart out of the house. Is it a kid? A dog? Then it's gone. The house is rubble, and whoever or whatever they saw is gone too. There's no mention of this darting figure in the official report, but the incident still haunts Senior Airman Brandon Bryant, one of the two men at the controls that day [source: Power].

In lightless, windowless boxes on Air Force bases around the country, people sit on chairs in regulation one-piece flight uniforms watching bright screen images transmitted from the other side of the world. These pilots control UAVs that patrol the skies over Syria, Iraq, Pakistan and other hot spots across the globe. More often than not the pilots are gathering data, but sometimes they're firing missiles at military targets. And they're at their posts for as long as 13 to 14 hours a day, six days in a row. On average, drone pilots fly their craft three times longer than conventional Air Force pilots spend aloft in their cockpits [source: Terkel].

Long hours, together with the strange disconnect between their immediate surroundings and the real-world consequences of their work, leads to a deadly combination of boredom and stress. And to top it all off, they get no respect. Teased by their peers for playing video games rather than flying, drone pilots are increasingly burnt out.

Recently, the Air Force has been having trouble recruiting new drone pilots to replace those who are retiring or quitting. The problem has reached such crisis proportions that Air Force Secretary Debra Lee James has publicly announced they are more than doubling incentive pay (to $1,500 per month). The Air Force needs more than 1,200 drone pilots, but as of January 2015 they had only 988 [source: Terkel].

Increasing the pay may not be enough. After six years of working as a drone warrior, Senior Airman Bryant left the Air Force, turning down a $109,000 bonus to keep flying [source: Power].