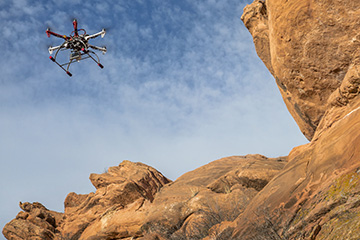 The U.S. military's use of drones to strike targets abroad has become highly controversial. Air Force drone pilots have been called "armchair killers," and the fact that a pilot can be sitting at a console in Nevada while pulling a trigger that kills people in Pakistan is found, by many people, to be unsettlingly remote and cold. But many, if not most, drone pilots are not actually directly engaged in making kill shots. Their job is to fly surveillance missions that gather data about potential threats all over the world.

One way or another, there's no getting around the fact that many of these soldiers wake up at home, drive a few minutes to their job site and then pilot expensive flying machines all over the world before going home for dinner. The job of the modern military drone pilot is a far cry from what we think of when we picture fighter pilots.

On the other end of the spectrum is the hobbyist drone pilot. Often self-taught, the hobbyist might even have built her own drone and taught herself to use it. Or, at least, that's the way it used to work. People have been making and flying model airplanes by remote control for many years, but with the advent of smartphone technology and cheap, off-the-shelf quadcopters equipped with cameras, the hobby of drone piloting has really taken off. Built-in drone cameras are motivating their pilots to take risks for great footage that the old-fashioned model airplane pilots rarely took.

The current rules are incomplete and in flux, but in general terms, you're not allowed to fly your drone above 400 feet (120 meters), you've got to be able to see it at all times and you have to keep it 5 miles (8 kilometers) away from local airports. Until February 2015, law enforcement officials had been issuing steep fines to hobbyist pilots who disobeyed these rules [source: Fitzpatrick].

Somewhere between the soldier and the hobbyist are the commercial pilots, many of whom have made businesses out of aerial photography and cinematography. The world of commercial drone piloting is rapidly growing, despite the fact that the new Federal Aviation Administration (FAA) guidelines concerning commercial drones won't come into effect until 2017. We'll discuss this in more depth on the next page.

Finally, there's a potential fourth category of drone pilot — drones themselves. In theory it's possible to plot GPS coordinates and simply send a drone off to pilot itself to a destination. The major obstacle to this is, well, obstacles. You need pilots to man the monitor and keep a sharp eye out for impediments such as trees, power lines, tall buildings and other drones. But new miniature 3-D camera technology is already making it possible for drones to "see" obstacles in their path and take evasive action [source: Finley]. A future in which drones pilot themselves may not be far off.