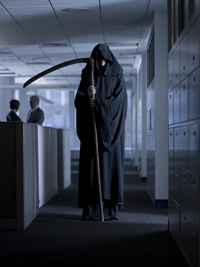 It's fair to say that most workers assigned a cubicle would prefer an office, but that's just not financially feasible for most companies. Additionally, it may not create the environment best suited for people to do their jobs. While an office cuts down on distractions, it also isolates workers socially and hampers the ability to share work-related information.

According to a study completed by the Cornell University International Workplace Studies Program, companies should consider tearing down the cubicle walls and doing away with closed-door offices. The office layout that may help workers get the job done is an open bullpen setup, in which several desks are clustered together in a semi-enclosed area.

This may seem counterintuitive; after all, wouldn't the noise factor be even worse? Maybe not. According to a separate study, occupants in open-office environments, without partitioned walls, were more satisfied with the noise levels and their own privacy of speech than cubicle dwellers [source: Jensen et al.]. It may be that removing cubicle walls destroys the illusion of privacy that some must feel they have when they yap away for hours to their dog sitter. When workers can see that those around them are concentrating, they may be less likely to engage in disruptive behaviors.

Workers would also be able to use visual cues to judge the best time to interrupt someone with a question. Instead of popping your head into a cube to see if it's a good time to talk, you'd know when your co-worker might have a minute to chat, so conversations could be better timed. Because tasks often rely upon the talents of an entire team, having this ability to share information quickly and efficiently could improve productivity.

In addition to facilitating work-related collaboration, an open-office environment may also aid in social interaction between workers. A network of social support at work is one key to reducing workplace stress and resulting depression. Simple things such as eating lunch away from your cubicle and with your co-workers can have a big impact both on your mental state and for your career. A study by Harvard and the Stanford Research Institute posits that 85 percent of promoted employees advance because of their people skills, as opposed to technical skills [source: Smith].

Now, adapting a new kind of work environment won't do anything about a germy desk or bad posture. You're on your own for those. But when your time at work is more productive and you're not wasting time dealing with stress, then you might have an extra five minutes to wipe down your desk and adjust your chair. And when you're more satisfied with your environment, you'll be more satisfied with your job. Cubicle death won't be a looming threat.

Just be careful on the commute home. That road rage can be a real killer.

Inside or outside the cubicle, workplace violence is a major threat to occupational safety. More than 3 million people in the United States are victims of physical attacks in the workplace each year, and homicide is the No. 1 cause of death for women in the workplace [source: Mannila]. Additionally, a survey of almost 500 U.S. workers found that almost one quarter of the participants were victims of habitual workplace bullying, and they weren't the only ones affected -- merely observing this bullying increased levels of stress in other employees [source: Lutgen-Sandvik]. Don't ignore your gut reactions that a co-worker could be dangerous; potentially violent behavior should be reported to a supervisor or human resources representative.