Distractions at Work Are More Than Just Annoying -- They're Deadly 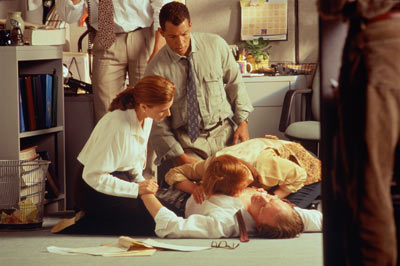 Maybe this could have been avoided if people took personal calls outside.
Bruce Ayres/Stone/Getty Images

So maybe you think you can withstand the occasional flu or backache, and these conditions certainly don't make your cubicle deadly. But these factors can be worsened by the third feature of environmental comfort, psychological comfort. People feel psychological comfort when they perceive control and ownership over their space and a general feeling of belonging [source: Vischer]. This is why some people decorate their cubicles, but control over this type of workspace is fairly limited, as anyone who's ever had to listen to a co-worker clip fingernails or chat for hours on the phone can attest.

The walls of a cubicle may be intended to fence a person off, but distractions are all around. Cell phones with exotic ringtones are constantly playing. Your co-workers treat the nearby copier as their personal pick-up bar and that creepy guy from the sales department keeps stopping by your cube to chat about his weekend.

These may seem like minor annoyances that distract you from your work, but because you're exposed to them day after soul-crushing day, they add up. The stress of not being able to concentrate on your work affects your body; your body reacts to stress by arousing the nervous system and releasing hormones. Your pulse quickens, you start breathing harder and your muscles tense. When your body is frequently exposed to factors that activate this stress response, the stress creates allostatic load. This increased stress has been linked to issues including high blood pressure, heart attack, chronic fatigue, musculoskeletal disorders, diabetes, depression and substance abuse [sources: McEwan and Lasley, De Croon et al., Vobejda].

Allostatic load can also contribute to a weakened immune system, which makes workers more susceptible to the cold we discussed in an earlier section. But this habitual stress can also weaken your brain. The hippocampus plays a role in turning off the stress response, but when the stress is constant, it can affect the hippocampus's ability in other functions, including learning and memory.

Current work in the field of neurogenesis, or the process by which the brain creates new cells, bears this out. A study of the marmoset's environment showed that when these primates are in a stressful environment, their brain cells retreat, and they stop producing new cells. Marmosets in enriched environments have enriched brains to match; these animals are showing increased and denser brain cells [source: Lehrer]. If you've ever left work feeling particularly brain-dead, it may be the combination of those bland particleboard walls and being forced to overhear inane conversations.

Another problem is seeing those cubicle walls too often. Whether you're working long hours to get ahead or just trying to keep up in a troubled economy, the lack of a work-life balance could prove deadly. In Japan, where long hours and unpaid overtime are regular practice, death by overwork, or karoshi in Japanese, is legally recognized as an official cause of death. In 2001, karoshi was deemed to be responsible for 143 deaths [source: JICOSH]. At least one doctor has posited that karoshi is due not only to long hours, but also to the stress created by years of working with the sense of feeling trapped and powerless [source: Tubbs]. If you've spent years in a cramped cubicle, that description may ring a few bells.

Even if you don't work yourself to death, stress takes its toll on your body. Stressed workers accrue health care costs that are 46 percent higher than those of a non-stressed employee [source: Schwartz]. So is the sight of your cubicle doomed to be the last thing you see before you head to the light? Find out if cubicle death can be prevented on the next page.