Office Germs Are Your Co-workers, Too 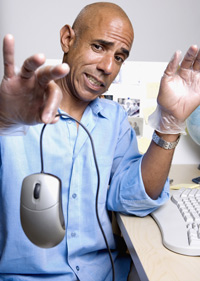 Who knows where this thing has been.
Tanya Constantine/Blend Images/ Getty Images

To do your best at work, you need to be healthy, so the first step in achieving environmental comfort is meeting needs related to health and safety. The typical cubicle may afford you a modicum of privacy, but you're never really alone in there. Instead, you're surrounded by thousands and thousands of germs. Custodial staff members are usually responsible for cleaning common areas, but not an individual's desk. So while you may be distrustful of a communal bathroom, your desk probably contains about 400 times more bacteria than a toilet seat [source: Market Wire].

Restaurants with surfaces that contain more than 700 bacteria per square inch are considered unsanitary, but the typical office worker's hands come in contact with 10 million bacteria a day [source: Barrientos]. If you make a telephone call, about 25,127 microbes per square inch are listening (in addition to the person in the next cubicle), making the phone the germiest item on your desk [source: Matthews]. Your keyboard and computer mouse also harbor bacteria, and so does your desktop. In a study that swiped the desks of different workers, teachers ranked as the germiest profession, while the cubicle-dwelling accountant came in second. The accountant's desk racked up 6,030 bacteria per square inch [source: Barrientos].

You're probably not thinking about these statistics as you take your afternoon snack; about 20 percent of workers never clean their desk before eating, while 75 percent of workers wipe down "only occasionally" [source: Clorox]. And yet the typical desktop is about 100 times germier than the average kitchen table [source: Market Wire]. Plus, if that snack came from a stash in your desk drawer, then you're cultivating a garden for mold.

Where do all these bacteria come from? One culprit is the worker in the next cube, the one that you hear hacking up a lung all day. In a survey of almost 1,000 workers, more than one-third reported to the National Foundation for Infectious Diseases that they felt they should go to work even when sick [source: Mason]. These sick workers are engaging in presenteeism, or making it to work when they should be home in bed. Think of all the things that sick people might touch in the course of the day: the microwave as they're warming up chicken soup, the fax machine when they're sending prescriptions to the pharmacy and the bathroom door as they head in to vomit. Because viruses can survive on surfaces for days, it's no wonder that the cold or flu makes it way from cubicle to cubicle.

But sometimes it may be the office itself that's making you sick. If you've ever felt allergic to work, it may not be in your head. Occupational asthma, or experiencing asthmatic symptoms such as itchy eyes and coughing while at work, makes up 10 percent of asthma cases in the United States and is estimated to be responsible for 24.5 million sick days annually [source: Belkin]. Some of the same symptoms are attributed to sick building syndrome, in which a moldy or poorly ventilated office causes headaches, fatigue and nausea, to name a few symptoms.

Yet a study investigating sick building syndrome found that while there was little correlation between the physical building and the symptoms, there was a strong correlation between job stress and the conditions [source: Boyles]. When your cubicle isn't meeting your basic environmental comfort needs and you get sick, your stress level rises. The researchers also found that when people had more control over their workspace, fewer symptoms were reported [source: Boyles].

Stress can also aggravate the wear and tear we put on our bodies just by sitting all day. Find out how your posture can ruin your health on the next page.