How to Deal With an Unfair Boss

Responding to an Unfair Boss 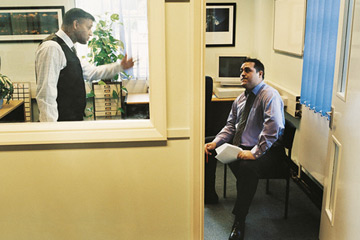 What should you do or say if your boss treats you differently?
David Ellis/Digital Vision/Getty Images

Unfair bosses are often psychologically abusive. When Greg dismissed Charlotte's suggestion, he winked and used a joking tone to remind Charlotte that he held the power. By using sarcasm, Greg made it abundantly clear that he viewed Charlotte's initiative as laughable. Other types of things an unfair boss might do include:

Even great bosses occasionally act like jerks. However, if you repeatedly find yourself feeling demoralized after interacting with your superior, chances are you're dealing with an unfair boss.

When workers feel demeaned, attacked or ignored, they often attempt to regain control by complaining to other coworkers, launching minor attacks or giving the boss the cold shoulder. While an "I'm not speaking to you" strategy may feel good in the short term, these types of responses are ultimately self-defeating.

A better strategy would be to:

By definition, bosses have power over their employees. Employees depend upon bosses for information and access, as well as good reviews and promotions. If your job security and/or civil liberties are threatened by unfair treatment from your supervisor, it may be time to take the next step. We discuss how to report an unfair boss in the next section.