How to Deal With a New Boss

Browse the article How to Deal With a New Boss 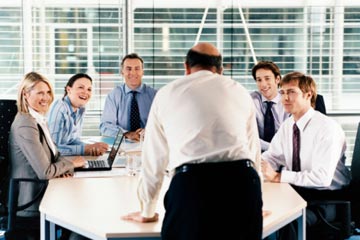 As you come into your first formal meeting with your new boss, keep an open mind, be honest, and above all, don't be fake. It's not always easy, but coming at this opportunity with the right attitude can make your life a lot easier.
Digital Vision/Thinkstock

Meeting a new boss is a bit like going on a blind date. It's an uneasy mix of anticipation and anxiety. You don't know if you'll hit it off. Is your boss insecure? Confident? Needy? Energetic? Is he or she smart? Smarter than you are? What if your boss doesn't know what he or she is doing? Or worse yet -- what if your boss is just plain "bossy"?

Even if you've both worked in the same organization for a while -- even if you've been friends with this person -- a new manager-employee relationship is a time of change and opportunity. This person has the power to make or break your career in your organization. That's why the way you deal with your new boss at the start is so critical. Handled the wrong way, this new relationship could sabotage your career or even land you in the unemployment line. Keep in mind your boss will size you up at the same time that you're evaluating this person who now has power over you.

How you handle the situation depends in part on the nature of your business relationship. If it's a traditional boss-employee situation, knowing the organizational psychology is as important as knowing your boss's personality. Today, more people are finding themselves in less traditional situations, reporting to people who may be thousands of miles away or in a more fluid or collaborative work environment. Maybe you're new to the organization. These issues (and more) are important considerations as you formulate a strategy for dealing with your new manager.

This article will address ways to acquaint yourself with your boss, what to talk about when you do and how to make the most of the situation. We'll even talk about what your options are if things between you and your new boss turn ugly.

That's a last resort, though. If you go into this new situation with the right attitude, you could be opening up doors you never knew were there. In the next section, we'll start with proper introductions.

Tips for Meeting a New Boss

Regardless of whether the new person is you or your new boss, you should arrange (if he or she hasn't already) a more formal one-on-one meeting soon after the first day on the job, being considerate of the fact that the schedule is probably pretty busy the first week. This is a great way to both demonstrate your initiative and start building this new relationship right away. Keep in mind that most new managers are feeling some stress at the change, too. You can help yourself by making clear that you can help him or her in the new position and that you're someone to rely on to get things done. The new boss may or may not have read your resume on file, so give a brief background about yourself, emphasizing the skills you bring to your position [source: Half].

Someone put your supervisor in that position for a reason, and it's almost guaranteed there is a plan in place for how things will be run. As you come into your first formal meeting with your new boss, keep an open mind, be honest and, above all, don't be fake. It's not always easy, but having the right attitude and looking at the new relationship as an opportunity can make your life a lot easier.

OK, so your meeting is all set. What are you going to talk about? That's what we'll discuss in the next section.

Questions to Ask a New Boss

Before you can know what questions to ask, you need to ask yourself what you want to know. Barring urgent projects that can't wait, keep your questions basic and to the point. You'll show you value the company's time and your own.

How many relationships end because of poor communication? One of the most important things to find out is how your new manager communicates [source: Stafford]. Everyone has his or her own style, and this person is no different. Most likely, you'll be the one who has to adapt. Does your boss prefer e-mail or telephone? Is he or she crazy about department meetings? It's as simple as asking about the preferred method. Working with his or her communication style will most likely save you and your boss some frustration and resentment.

Almost as important as communication is learning about your new boss's expectations. Your boss may not expect you to take out the trash or walk the dog, but just like at home, on-the-job expectations need to be managed. This is impossible unless you actually know what those expectations are. During your meeting, find out things like how and when reports should be produced. Where does he or she see the department going? What are the roles for people in your department?

Be honest and direct, but don't pile on flattery to ingratiate yourself. You'll be spotted a mile away, and it usually backfires.

Listen carefully to the answers. Entire books have been written on how to read facial expressions. You probably don't need to go to those lengths, but watch your manager's mannerisms -- tone of voice and how things are phrased -- in addition to what's actually being said. All of this will help you gauge this person's attitude, priorities and even potential pitfalls. Think about what opportunities your new boss presents for you in the organization [source: Reyer].

Your main goal in the first formal meeting is start building your work relationship. Don't try to accomplish everything all at once. There'll be plenty of time for that later. Once you learn the basics, it's time to think about any changes you might need to make. We'll talk about that in the next section.

Adapting to a New Boss

Part of adapting to a new boss is making a good impression. Coming in a little early and working the extra mile will get you noticed and could go a long way toward helping you and your new boss hit it off [source: Hunsinge].

Even with that, odds are you're going to have to be willing to try things a new way [source: Half]. Your new manager came into this position with ideas of how the department should be run. At least at first, expect to follow your new leader. Remember that your co-workers are likely to be doing the same thing you are, and a smart manager will let everything sink in before taking your advice completely to heart [source: Willis].

Adaptation is one of humanity's greatest traits. Switching from e-mails to phone calls for communication ranks low on the difficulty scale. But if your previous boss was a hands-off type who let you get your job done your way, and your new one is a micromanager who insists everything must be done his or her way, that gets a little more difficult. Micromanaging is a serious issue, resulting from either a lack of trust or a need for control. If you think it's a lack of trust, try to earn that trust by showing how good your work is. If it's a control situation, it's likely that person is insecure and not capable of any fundamental change. In that case, you should either seek a transfer within your organization or find a different employer.

If you find yourself reporting to a former co-worker (even a friend), know that your old relationship will necessarily change. Reporting to friends can be just as tricky as managing them, so learn the boundaries between your personal relationship and the organization's needs, recognizing that your friend now has responsibility for your performance, as well.

Sometimes, managers are hired or promoted because they impressed someone in a position of power. But what if it's painfully obvious they're in way over their heads? Don't take action right away, but if you believe this will be a problem, start documenting instances where their lack of qualifications is costing the company. Only when you have documentation substantiating your claim should you bring it to management.

In most cases, dealing with new bosses presents more promise than anguish. If they're reasonable and you're willing to adapt to the new situation, there's no reason the new department culture can't do as well as, or better than, the previous one.

How to Deal With a New Boss: Author's Note

It's rare for anyone who's worked for more than a few years to not have their share of bosses, and I'm no exception. This article was informed both by lots of research and personal experience. Personal experience gave me a pretty good idea of the types of bosses out there, from laid back but inspirational to micro-managers who probably have no business being in charge of anybody.

The research gave me a better ideas about how to deal with these people, who are usually just trying to do their best in a new situation. As a librarian by trade, learning about new things is a lot of fun in its own right and I hope you too enjoyed learning some new tricks to help in whatever situation you find yourself.

Stuff You Need To Know: