Browse the article Can you make a living on YouTube? 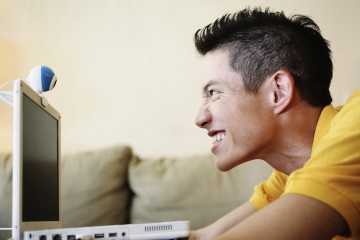 Some Youtubers have made a fortune by sharing their innermost thoughts. Could you be so lucky?
Fuse/Thinkstock

YouTube took in around $5.6 billion in advertising revenue in 2013 — not too shabby for a website less than a decade old. Even with the company hanging on to roughly half of all ad income, that's still a pretty nice chunk of change left for content creators [source: Kaufman]. Before 2012, you could place ads on videos you uploaded to the site, but you had to find these advertisers yourself and the process was a bit convoluted. The launch of the YouTube Partner program in 2012 made it incredibly easy for anyone to slip a few ads into their videos, and share in the revenue, with YouTube doing all the legwork of actually finding these online advertisers. Within just a few short years, the company could claim more than 1 million partners — content creators who incorporated ads in their videos to earn a share of YouTube's profits — and some of these video savants are living the high life [source: Kaufman].

Korean musician Psy earned a cool $2 million after more than 2 billion YouTubers watched his catchy "Gangnam Style" video, released in 2012 [source: McIntyre]. Video maker Jenna Marbles likely earned in excess of $300,000 in 2012, thanks to silly pop culture videos she added to the site [source: O'Leary]. Olga Kay manages five YouTube channels with a total of a million subscribers, creating around 20 videos a week to earn a six-figure salary [source: Kaufman]. Swede Felix Kjellberg earns $4 million a year with videos that show him commentating as he lounges around playing video games under the name "PewDiePie" [source: Smith].

Reading stories of these "normal" folks pulling in big bucks for seemingly simple work can tempt anyone into the world of online content creation, but can you really make a living on YouTube? Sure, but don't count on it. Expecting to launch a content channel that pulls in millions a year — or even a living wage — is like going into acting expecting to earn as much as George Clooney. Just like there are countless actors out there earning virtually nothing from their craft, there are also hundreds of thousands of YouTube users who would be lucky to squeeze out enough income from the site to pay for groceries.

Jack Conte, who creates video mashups of songs on the site, earns about $400 for the 4 million views his videos garner each month [source: Luckerson]. Engineer Scott Driscoll estimates that he's earned less than $6,000 total after more than 4 million views over the course of six years [source: Driscoll]. While YouTube owner Google keeps earnings figures quiet, the company says that thousands of content creators earn a six-figure salary — with at least a million partners, that means there are a lot more who aren't earning anywhere near this level [source: Kaufman].

And it appears that YouTube earnings are going down. In 2012, the average user made $9.35 every thousand times a video ad played before one of his uploaded videos. Today, that figure has dropped to $7.60 [source: Kaufman]. That means that 100,000 people could check out your video in a month — no small feat — and you'd still pull in only around $760 ... not insignificant, but not enough to live off, either.