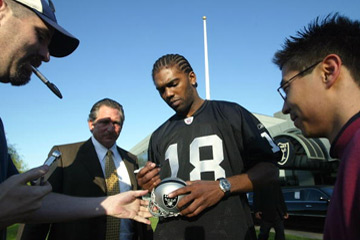 Former Oakland Raiders wide receiver Randy Moss greets fans after his 2005 introductory press conference. The team restructured his salary to include a prorated signing bonus spread out over the length of his contract.
Justin Sullivan/Getty Issues

Signing bonuses, also called sign-on bonuses, are special cash incentives reserved for the most in-demand employees. In the professional sports world, star players often get lucrative signing bonuses when they sign new contracts. In the business world, star executives receive the same royal treatment. Even in a down economy, executives receive $5 or $10 million signing bonuses to leave a current position and bring expertise to struggling companies [source: Flint]. When the economy is booming and competition for top talent is fierce, signing bonuses can get ridiculous. Consider the $45 million "golden hello" former G.E. exec Gary Wendt received in 2000 to join insurance giant Conseco [source: Kadlec].

But the real question is: Do you deserve a signing bonus? The decision to offer a signing bonus as part of salary negotiations primarily boils down to supply and demand [source: Morsch]. If you work in an industry that's strapped for qualified employees, then companies might use a one-time cash bonus to lure top candidates. Even when unemployment is high, there are some industries that are always looking for qualified workers. Healthcare workers -- particularly nurses -- are often given signing bonuses in exchange for moving to a less desirable location. The U.S. military currently offers a $25,000 signing bonus for nurses willing to enter active duty [source: U.S. Dept of Health and Human Services].

In better economic times, information technology workers often received some of the highest signing bonuses. Back in 2006, 65 percent of employers were offering signing bonuses to attract network administrators, software engineers and other in-demand talent [source: Hansen].

As a general rule, if you're actively looking for work, you're less likely to receive an offer of a signing bonus than if you're wooed away from your current position. Employers use signing bonuses to attract top talent without inflating the base salary for similar positions in the company [source: HR Magazine]. For example, if you currently earn $100,000 a year and a competing company offers you the same salary, you probably wouldn't take it -- but a $20,000 signing bonus might sweeten the deal.

If leaving your current job would cause you financial hardship, you're in a better position to ask for a signing bonus [source: Morsch]. For example, if you're due for a raise or a bonus at the end of the year at your current job, you might ask for a signing bonus upfront to cover those lost future wages. If leaving your job would incur relocation costs or double your commute, you also have more negotiating power.

For employers, the danger of offering a signing bonus is that the employee could turn around and leave for a better offer. To prevent this, most bonuses are distributed over a set period of time: 25 percent payments twice a year over two years, or no payments until six months into the job. Be warned: If you break the contract and leave early, you'll have to repay the bonus in full [source: WorldatWork].

For lots more information on salary negotiations and job interviews, click the links on the next page.

AfterShock: Year One in the Life of a Comic Book Startup
How Unemployment Works
How to Handle Workplace Bullying