Browse the article Does brownnosing really pay off? 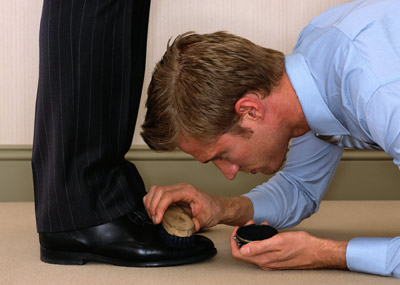 Nobody likes a brownnoser. So, why does the boss always seem to fall for it? See more pictures of corporate life.
Max Oppenheim/ The Image Bank/Getty Images

­Day after day of hard work, toiling away for long hours in your uncomfortable cubicle under cold fluorescent lights, and still the boss pays no attention -- not even as much as a "thank you." Meanwhile, the incompetent suck-up he just hired has already won the corner office. The boss loves him even though it seems his only talent is his ability to compliment and fawn over the higher-ups. Is it just our imaginations, or do bosses really reward brownnosers?

Flattery is powerful. People use it to ingratiate themselves with others for personal gain. Although most of us like to think of ourselves as having too much self-respect and dignity to ever use it, most people do at some point. We often encounter situations where we could suck up to someone -- a romantic interest, a curmudgeonly professor, potential parents-in-law or an IRS auditor. If they have the power to give us what we want or to make our lives hell, chances are we'll look for ways to get on their good side.

It's hard to draw the line where flattery becomes unethical. Most people agree that it's best to show respect to one's boss and avoid insulting him. But is it wrong to actively look for ways to compliment him? Maybe it's unethical whenever we have any selfish motivations at heart. If that's the case, is it selfish for a job applicant to profusely thank a potential employer for the opportunity of an interview when he really means it and also thinks it could help him get the job? Perhaps it's unethical only when we don't really mean it.

Ethical or not, brownnosing works -- at least sometimes. Psychological studies have looked into this flattery phenomenon to see just how effective it is and why. We'll take a look at some of these studies next.

The Effects of Brownnosing 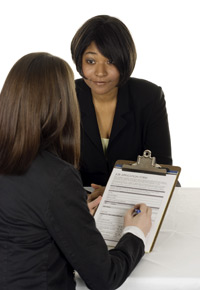 Brownnosing could really work, according to studies done in interview situations.
iStockPhoto

If you suspect your boss has gotten roped in by a brownnoser, you may be right. Psychological research has shown evidence that employers are susceptible to it. In a University of Florida study, researchers tested the effects of brownnosing in the context of job interviews. The tests measured ingratiation and self-promotion techniques [source: Keen]. Ingratiation refers to behavior where the interviewee showed agreement with and even complimented the appearance of the interviewer. Self-promotion, on the other hand, includes the interviewee touting his own abilities and talents. Based on the responses of interviewers, researchers found that ingratiation worked pretty well, but self-promotion didn't help the candidate [source: Higgins].

Perhaps it's just human nature to be susceptible to flattery. One opinion says that flatterers indulge our self-love. But a less cynical explanation says that flatterers appeal to us because we believe they're like us [source: Geake]. Researchers point to the similarity-attraction theory, which states that we're attracted to people who are similar to us [source: Keen]. Yes-men or brownnosers appear to be like us by always complimenting and agreeing with us. Nevertheless, most of us enjoy getting compliments, and we grow fond of people who heap them on us. Based on this theory, we're more likely and more willing to do favors for the people we like.

Rewarding brownnosing doesn't necessarily lead to terrible results and bad management. Employers have a vested interest in rewarding jobs to those whose beliefs align with the company's [source: Keen]. As long as brownnosers are sincere in their agreement, they make a good fit for the company.

The problem comes when employers fail to recognize whether a flatterer is sincere. So if brownnosing is such an obvious tactic for employees to take, one would think employers would be always on guard against it. Researchers found that even when we know a flatterer has something to gain by our good favor, we like flatterers more than people who don't compliment us [source: Weiner].

Perhaps defending against flattery is easier said than done. Studies show that when we witness someone flattering another, we're likely to be suspicious. But if the same person aims the compliment at us, we'll probably fall for it [source: Smith]. Although we -- as a third-party observer -- see right through a brownnoser, our boss, who is the object of the flattery, might not.

­As effective as brownnosing can be, it doesn't always work. Next, we'll talk about the delicate line brownnosers walk. 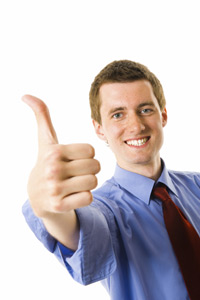 When bosses catch on to brownnosing "yes-men," the plan backfires on them.
Kuznetsov Dmitry

Although the studies we discussed on the last page have shown how susceptible we are to brownnosing, we aren't always fooled. It's easy for a brownnoser to go too far.

­When the boss finally does recognize that a brownnoser is sucking up for personal gain, the jig is up. He'll probably get disgusted with the brownnoser and brush off his flattering words from then on. The effective brownnoser is careful not to cross the line and make his plans obvious. Psychologists call this problem the Ingratiator's Dilemma. It refers to a brownnoser's attempt to get on someone's good side without overdoing it or making his scheme obvious.

Even if you don't consider yourself a brownnoser, you might run into this situation. For instance, to write an effective recommendation letter, one has to talk up the subject without crossing the line into ridiculous praise [source: Giacalone]. You might mean every word you say, but at a certain point, the reader might find it hard to believe. If you go too far, you could ruin the chances for the person you're trying to help.

It can be difficult to strike a balance between showing disrespect and fawning over your superiors. But there are some ways to effectively ingratiate yourself with your boss without raising red flags. For instance, your boss probably has a style and a rhythm all his own, and you should try to match it [source: Weiss]. Like the maxim says, "Imitation is the sincerest form of flattery." Mimicking his behavior will help you win his favor and probably make you and your boss a more productive team. If you feel compelled to compliment him, be sincere.

Respect is the keyword here. You can respectfully follow orders even if you don't always agree with them. Although bosses may like yes-men, show enough respect for him that you occasionally voice disagreement. Let your respect shine through, and hope he appreciates and reciprocates it.