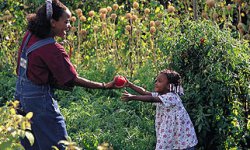 How much do you know about renewable energy?
Photodisc/Thinkstock

When gas prices skyrocketed at the start of the 21st century, the world, and especially the United States, faced a rather startling reality: Our primary energy supply, fossil fuels, is even more unstable than some of us thought. Fossil fuels are finite and frighteningly subject to market, political and geological trends.

We now know that if our cars are to continue getting us to work, we must make renewable energy more than a fleeting interest in the newest hybrid. With increasing government and private funding of renewable energy, the industry as a whole is exploding, and along with it the number of potential jobs in the green-power sector.

If there were such a thing as a sure thing, expansion in green-energy employment opportunities would be it. It's a huge market, encompassing solar power, wind power, geothermal energy, biofuels and hydropower, for a start. Research and development are ongoing, large-scale capability is increasing, and real-world implementation of renewable-energy technologies is growing by the day.

It's not easy to wade through the chaos of a developing industry in search of the right job. To simplify the process, here are five of the highest-demand, fastest-growing careers in renewable energy -- a taste of the most promising opportunities in the industry.

Number 5 is an oldie, a goodie and an umbrella for all sorts of energy interests.

“Engineer” is something of a catchall term. Engineers solve problems and develop technologies. Some engineering branches include electrical, chemical, environmental, hydrological, mechanical, aerospace, biomedical and biochemical engineering, to name a few.

In the development of renewable energy, engineering usually leans toward the mechanical, electrical and environmental end of the spectrum, especially research and development. Engineering also plays a central role in the initial implementation of new technology (or an old technology for a new purpose), which is a major component of the green-power field.

Engineers design hydroelectric dams, solar cells and wind turbines. They design the systems that carry the electricity from the wind farm, dam or solar field to the power plant. They come up with ways to turn corn into ethanol, sun into hot water, landfill gas into green fuel.

For those who choose an engineering career, endless green-energy applications and specialties exist, making engineering a top job for a broad range of people with various talents and interests. It's a highly adaptable and customizable career path.

It also pays nicely. Engineers pull in an average salary of $66,000, according to the web site Simply Hired. Depending on specialty, that number can be significantly higher. An engineer working on a wind farm can potentially pull in six figures.

Of course, you'll probably be paying off school loans with some of that cash. Engineers have bachelors' degrees at minimum and typically have advanced degrees. Engineering is not a quick-entry renewable-energy career, but it can be long-lasting and versatile one.

Number 4: Another oldie but goodie, just a bit repurposed.

People have been farming for hundreds of years. Traditionally, a farmer’s job has been producing fruits, vegetables, grains, seeds and herbs for human consumption – providing for the human energy supply, if you will. In the new-energy economy, farmland will continue to provide energy sources for humans, but not just for their bodies.

More and more, farmers are growing food not for the kitchen table but instead for automobiles and clothes dryers. Bioenergy is a quickly expanding sector of the renewable-energy market, and those looking for a career providing modern, green power can realistically look to one of the oldest professions in the book to make a living. Corn ethanol already has a strong presence in the mainstream fuel supply. It's added to most of the gasoline you get at the pump, in various amounts. The ethanol market will most likely continue to expand despite reservations about setting aside so much land for energy crops; as far as money crops go, corn is still a good one.

Soybean, sugar cane, wheat, coconut, oil palm and grape-seed farmers could also find their produce in high demand in the production of ethanol and other biofuels such as biodiesel. One of the big selling points for farming as a top renewable-energy career is this broad range of potential biological inputs (and outputs). Depending on location, cultivating energy crops is seldom a uniform venture. Many options exist for those looking to get into the field.

Another biggie is the "waste not" angle. Farmers can potentially turn some types of farm refuse, including corn stalks and cow manure, into biofuel. This type of energy production is still mostly in the research stages, but the possibility means that even those farmers who specialize in food crops could someday make a bit extra by putting their farm waste toward bioenergy production.

Solar isn’t the biggest or the cheapest form of renewable energy. It’s not quite up to utility-scale, but it’s on its way. With increasing success in making solar power a storable energy source (see Is there a way to get solar energy at night?), our lights could be sun-powered whether we have photovoltaic (PV) panels on our roofs or not.

In the meantime, PV-laden roofs are becoming more commonplace (entire community developments now incorporate them), and solar water heaters and pool heaters are huge, especially in sunny locales like Arizona, New Mexico, Florida, California and Texas. If you live in one of these states or wouldn’t mind moving, a career as a solar-panel fabricator or installer could be a very promising job. While full-home PV systems are still working toward the breaking-even mark, heating water with solar power is inarguably cost-efficient. Using solar water heaters is growing as a standard practice around the country, and it’s already standard in some other countries, like Israel).

For a career installing solar panels, having a construction, mechanics or electrician background is a good start. College degrees aren’t necessary. Hourly pay can range from $15 to $20 an hour depending on experience, according to JobMonkey. Official certification in solar installation can raise that. The money for manufacturing and distribution of solar systems can be significantly higher, anywhere from $60,000 to $80,000 per year, according to PayScale.

Solar power is a burgeoning segment of the renewable-energy market. Demand and compensation are both there (for those who don’t have a fear of heights).

Number 2: A career in the fastest-growing type of renewable energy.

In an industry that’s growing at a shocking clip – by 45 percent in 2007, says the American Wind Energy Association – the opportunities are practically endless. Wind farms -- those huge, sprawling groups of turbines that spot wide-open, high-wind areas all over the world -- are popping up in still-increasing numbers, sending megawatt on megawatt of relatively clean power to the grid. With the increasing success of offshore wind-farm development, the industry can only grow.

Those who have the talent to put together these projects from the ground up can find tremendous success in today’s renewable-energy market. Securing the land, the power purchaser and the legal permissions, and facing a building trend toward anti-farm lawsuits and government regulation is not an easy task. However, if you have the drive to get it done, wind-farm development can be a moneymaker. When huge utility companies express interest, which they’re doing at an increasing rate, dollar signs follow.

Developing a wind farm can also be an extraordinarily fulfilling career if you happen to care about cleaning up the electrical grid. Wind plays a truly significant role in displacing coal and nuclear power. It has a long way to go in making a big dent, but it’s the current best bet. That alone makes wind-power development a top job in renewable energy. The profits don’t hurt, either.

To familiarize yourself with the initial steps involved, check out the AWEA’s 10 Steps in Building a Wind Farm.

Negotiating such massive-scale involvement in wind power isn’t for everyone. So, the No.1 job on our list takes a more hands-on approach to harnessing wind energy.

As the number of installed megawatts of wind power continues to grow (and grow and grow), so does the army of workers required to supply, set up and service the huge turbines that generate the electricity. Those 30-to-60-meter blades don’t take care of themselves.

The technical aspect of wind power, including fabrication, installation and maintenance, is a tremendously growing field. As with solar, hands-on wind energy jobs have a wide range of pay scales depending on experience and specialty. Also, they tend to bring in the type of money associated with skilled construction jobs.

Demand is a bigger draw toward careers in wind energy than money, however. The U.S. government is enthusiastic about renewable energy in the 21st century, and wind is currently the most realistic option. It has an established record of success. The more massive wind farms in the works, the more openings in every stage of development: building turbines, installing turbines, setting up the power distribution, fixing the structures when they break down.

Backgrounds in engineering, construction, electrical and mechanical work, and heavy machinery are all pluses and will probably increase your hourly rate or annual salary. In short, there’s reliable work to be found in wind power.

There are, in fact, jobs to be found all over the renewables sector. Green is big right now. Huge. And unless fossil fuels suddenly become a limitless, fully accessible resource that can produce power without a negative environmental impact, green is only going to get bigger. That means relative job security. These days, that’s no small thing.