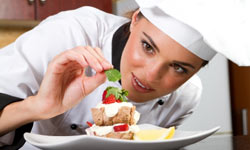 The classic foodie role of chef is still one of the most popular.
©iStockphoto.com/michaeljung

Foodies -- people who not only love to eat, but are infinitely interested in all things edible -- come from all corners of the globe and all walks of life. In fact, foodie-ism is one of the world's great equalizers, because it allows socially, culturally and economically diverse people to meet on equal footing as they appreciate the merits of various culinary offerings, from fine wine and ripe cheese to taco-truck carnitas. Want to debate about the perfect peach or learn to identify the dominant cheese in a quattro formaggi in less than five seconds? A foodie can probably help you out.

Perhaps unsurprisingly, foodie jobs are as diverse as the food lovers themselves. Foodies may become chefs, food writers or even farmers in order to explore ingredients and cuisine. And because the world is finally beginning to catch up with what foodies have always known -- that eating is more than just a biological necessity -- there are new food-related careers developing all the time.

How do you know if you have what it takes to succeed in a foodie job? Read on to learn more about 10 fields for the food-obsessed and what each one entails.

When people hear about the work of a food stylist, they're naturally somewhat confused. What's the point -- doesn't food simply get chewed up and swallowed? Food stylists, on the other hand, understand that the more attractive food is, the more likely it is to be sold, eaten and enjoyed.

Food stylists do a lot to make food beautiful, including arranging, misting, torching, propping, pinning, polishing and shellacking it [source: AoFB]. They usually work with photographers, actors and producers to create and display visually appealing food for magazine articles, advertisements or design pieces. Some are former chefs, and virtually all are life-long foodies.

Some culinary schools and photography schools offer food styling courses, but a lot of would-be food stylists learn the craft by working with other stylists [source: Shirasky]. Once you're established, though, food styling can be a pretty good gig. The pay for a day's work as a food stylist ranges from $300 to about $1,200.

The work of a food stylist is not meant to be eaten. Their creations may contain pins, screws, glues and chemicals that are used to make the food look attractive but render it utterly inedible.

People who love food are invariably curious about where it comes from and what can be done with it. That's why a great job for foodies is to be a food educator -- especially one who combines the beauty of growing and cooking food with essential academics for children.

Jennifer Mampara, for example, is a die-hard foodie who makes a career out of giving lessons on gardening, nutrition and food preparation to children at Watkins Elementary School in Washington, D.C. "Kids are naturally drawn to gardening and cooking," she says. "And they learn so much about math and science through planting, observing, harvesting and preparing different foods."

With health and nutrition becoming national priorities, educating both children and adults about the virtues of good food, as well as how to grow and prepare it, will likely continue to rise up in the ranks of foodie careers.

Soon after moving into the White House, first lady Michelle Obama planted a vegetable garden, which provides food for the first family. She also uses the garden to teach local school children about the importance of growing and eating healthy food [source: White House].

Throughout history, some of the best cuisine has been born of a combination of necessity and creativity, and the same holds true today. And if you're a foodie with a penchant for experimentation, you may just stumble upon the next big thing in cuisine.

In the old days, having a new idea for a food or beverage meant pounding the pavement in a quest to convince others to try your creation. Nowadays, people are very interested in trying new and entrepreneurial foods, especially if said foods are local, organic and come with a good back story -- such as Sam Adams dusting off his great grandfather's beer recipe to make Samuel Adams Boston Lager [source: SamuelAdams.com].

So whether you're stuffing bison burgers with foie gras or deep-frying Mars bars, remember that bringing a delectable new dish to market could be a great way to kick off your foodie career.

An Edge for the Epicurious

Looking for resources to get started as a food entrepreneur? The U.S. Department of Agriculture offers links to assistance programs for foodies with the next big idea [source: USDA].

Are you able to discern subtle differences in taste and texture? Are you interested in searching the world for fine flavors? Would you enjoy tasting different foods and beverages on a daily basis? If so, perhaps being a food buyer is right for you.

The job description for a food buyer is pretty straightforward -- identify and evaluate foods for purchase. Whether this is a good job depends a lot on the employer. Being a food buyer for a relish company, for example, is only good if you happen to love relish.

Food buyers usually have culinary backgrounds, though many enter the field with marketing or business training. The average salary for food buyers is about $36,000 annually, but this varies quite a bit depending on your qualifications and the company you're working for [source: BLS].

Some foodies are blessed with a great passion and appreciation for food, as well as a talent for expressing themselves through the written word. For this particular breed of foodie, often the best choice is to become a food writer or blogger. Sure, it may lack the glamour and prestige of running an upscale kitchen or creating the latest culinary craze, but you do get to have a hand in educating and informing others about all things food.

Being a restaurant critic is probably the most traditional form of food writing. However, being a food writer these days involves more than just critiquing food. Food writers and bloggers often cover a wide range of topics, such as culinary trends, farmers' markets and how love is like stinky cheese (i.e., with luck, both get better over time).

If you're a foodie whose pen is mightier than your spatula, but there's no particular publication that strikes your fancy, consider writing a food-based novel or starting a food-themed blog. These days, foodies are creating literary feasts centered on food's connection to culture, romance, identity, health, politics and just about anything else you can think of. 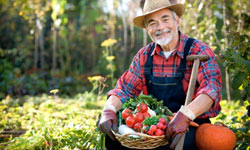 Some people may not picture farming alongside other "glamorous" foodie careers, but the small farmer job made our countdown for the simple fact that crops are merely delicious foods that have yet to be plucked from the ground.

According to Dominic Kostelac, CEO of the Virginia-based Arganica farm club, foodies make great small farmers. "More and more, people are searching for local, organic and fresh foods," he says. "We work with a lot of small farmers -- many of whom started farming in order to grow better food -- as well as wine-makers, pie-makers and anyone with a good product. When we find something delicious, we collectivize it for our members."

So if you enjoy planting, nurturing and harvesting food, consider becoming a small farmer. It could be a great way to make a career out of doing something you love.

Another great career for foodies -- especially those with a scientific bent -- is molecular gastronomy, which deals with the chemical and physical properties of food. Don't let the name fool you: This isn't the same as studying the way food affects the human body on a molecular level. Molecular gastronomy is more concerned with the science of culinary processes than the science of ingredients, though chefs may use unusual ingredients such as liquid nitrogen to ignite these processes [source: This]. For example, a molecular gastronomist may create "faux" caviar by subjecting a liquid, such as a fruit juice, to a process called "spherification" that involves solutions like sodium alginate and calcium chloride. The result is a plate full of tiny palate-pleasing pearls that have a firm exterior and a liquid interior.

Molecular gastronomy has its detractors. Indeed, many a die-hard foodie cringes at the Frankenstein factor involved in this field. After all, using compounds normally found in chemistry labs doesn't exactly suggest down-home deliciousness. But for those who enjoy mixing science and art to create an infinite variety of edible treasures, molecular gastronomy is a wonderful career path.

In 2006, the top three chefs in Restaurant magazine's ranking of the world's top 50 chefs had a background in molecular gastronomy [source: This].

If you're infinitely interested in food, but would like to do something a bit more scientific than working in a restaurant, then perhaps being a research chef is the right job for you. Research chefs work in fully-equipped, state-of-the-art-kitchens to create and test foods for market-worthiness. When a chef or food entrepreneur has an idea for a new food product, he or she often sends it to a research chef for analysis and feedback. A research chef may also be given a concept or idea for a food, which must then be developed into an edible product.

Research chefs can work directly for food companies or serve as independent food research consultants. In addition to working directly with a food product, a food researcher may also be involved with such tasks as the naming, packaging or marketing of the product being tested [source: RCA].

For a lot of foodies, cuisine is inextricably linked with nutrition. But the health-yumminess balance isn't always easy to achieve, especially in the United States, where people have become accustomed to fast and heavily processed foods that don't pack a lot of nutritional punch.

Enter the nutritionist, a culinary knight in shining armor for those who wish to eat healthy, but also enjoy what they consume. Their job is to teach people how to experiment with healthy food in order to bring out its full flavor potential.

"There are a lot of opportunities for nutritionists as companies, insurance brokers and individuals to seek ways to prevent disease through diet and lifestyle," says Kristen Ciuba, a Washington, D.C.-based nutritionist.

Being a nutritionist is also a potentially lucrative career choice, with independent consultants earning between $40 and $120 per hour [source: Ciuba]. It's also a fast-growing field and one that's perfect for foodies with a penchant for helping others [source: BLS].

Despite the emergence in recent years of new and exciting food-based careers, the top job for many foodies is still to be an executive chef at a great restaurant. And this dream may just become a reality for food lovers with the right experience and a lot of heart.

"The key to being a good chef is being able to treat food with love, whether you're cooking for your mom or for 300 strangers per night," says Ari Gejdenson, chef of Acqua al 2 in Washington D.C. "It's tough sometimes, but that's what separates the good from the great in the kitchen."

Most executive chefs start in lower-level kitchen jobs and work their way up to the top. Many have formal training from a culinary institute, but some learn the trade by working for someone else. And this can pay off nicely. Although the median annual salary for chefs in the United States is about $39,000, executive chefs in upscale restaurants and hotels can earn $80,000 or more [sources: BLS, NRN].

If you're a chef who doesn't want to work in a traditional restaurant setting, consider becoming a personal chef. Personal chefs plan and prepare delicious meals in people's homes for special occasions or on a regular basis. They differ from private chefs in that personal chefs typically work for a variety of households rather than just one [source: Wilson].