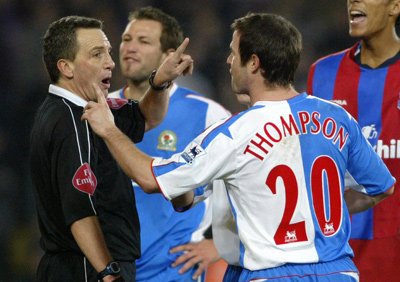 There are some situations where swearing at work is inappropriate, like swearing abusively at a ref. Plus, it will get you thrown out of the game.
Courtesy Carl De Souza/AFP/Getty Images

Your office is a civil place. Your co-workers regularly excuse themselves and step out of the way when passing one another in the hallway. Sensible, yet stylish, outfits from Ann Taylor and Calvin Klein are the norm, and it seems that at any moment someone will break out the tea service and cucumber sandwiches. The modern office is an extremely polite place, especially among large corporations. But occasionally a situation arises where even the most well-bred employee feels the need to break the genteel silence with a really dirty expletive.

Based on a study by researchers at Great Britain's University of East Anglia, employees should feel free to go right ahead and let it rip.

The study examined both the prevalence and effect of swearing in the work place. What researchers Yehuda Baruch and Stuart Jenkins found was that swearing may be more beneficial than the average Human Resources director would like. Baruch and Jenkins hung around a mail-order warehouse and watched the effect swearing had on the workplace environment. They found that, when used in a non-abusive manner, swearing enables the development of personal relationships among co-workers. After all, if an employee uses foul language in his everyday life outside of work, then this represents part of the employee's personality. The absence of this personal aspect could serve as a constraining barrier between employees, keeping them from really getting to know one another.

­Swearing, Baruch and Jenkins found, can also act as a stress release among employees. Rather than keeping an emotional reaction bottled up, it could be healthier for an employee to swear, thereby releasing his frustration, and enabling him to move on. They found that swearing can also serve as a means for co-workers to become a cohesive group. Swearing among women was also found to be prevalent, especially when women are around other women.

The researchers discovered that swearing was more common among lower-level employees, and that those in management and executive positions were less likely to swear in the workplace. But Baruch says that although a manager may not swear, the researcher hopes that the study will open managers' minds to allowing swearing in the workplace [source: University of East Anglia]. This represents a radical shift from workplace philosophies regarding swearing, which has traditionally been frowned upon -- if not outright banned.

The researchers consider their study as a challenge to managers' leadership skills. While Baruch and Jenkins found that swearing improved morale among workers, there were definite situations where foul language isn't appropriate in the workplace. Swearing in front of customers or high-level management are two examples of counter-productive swearing, the researchers found.

It can be painful to witness a co-worker swear when he's unaware a customer is present. It's even more painful when a co-worker doesn't appear to understand the seemingly natural boundaries that surround swearing in social situations. There are simply some situations -- like those where customers or executives are present -- where swearing just isn't appropriate. Rather than relieve stress, swearing in these situations seems to impregnate the air with tension.

But how do we know in which situation it's appropriate to swear, and which situations prohibit it? Certainly prescribed rules can tell us the boundaries, but we humans also seem to have a sense built in that guides us in these situations. Read the next page to find out about the possibilities of intuition. 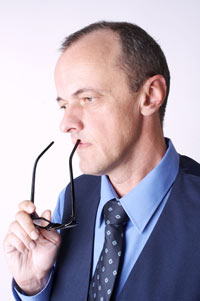 So what exactly is that little feeling in your gut that tells you when it is or isn't appropriate to swear? Is it simply a byproduct of being socialized, or is it something on a more primitive level?

Psychologists have debated for decades about intuition -- described by one researcher, David Myers, as "an effortless, immediate, unreasoned sense of truth" [source: Psychology Today]. Intuition is also sometimes called a hunch, a gut-feeling, common sense and even a sixth sense. Intuition is widely accepted in popular culture, but whether or not it even exists is questioned by some scientists.

Still, the idea of human intuition persists. Chalk it up to the countless experiences the average human has had. Like knowing he was walking into a dangerous situation before danger showed itself. Or deeming a person he's just met trustworthy. Or knowing when a coworker would react badly to hearing him swear.

There has been increasing research into the subject since the work of Dr. Seymour Epstein, a psychologist in the 1970s who theorized that we operate through both rational and intuitive learning. Since then, cognitive psychology has taken up the gauntlet, delving deeply into the study of how we can make snap judgments based on minute information. What these researchers have uncovered is that it appears that the difference between intuition and rationality may be simply a difference in the way we learn. With rational thinking, a person has spent time studying and teaching his brain to understand the information he's presenting it (called cognitive learning). Under intuition, we learn without knowing we have learned. We gain information without studying, without undertaking the processes of learning. Yet we understand what we've learned just as much as we understand what we've studied.

This information can come from a variety of sources -- even from faces. Microexpressions are one example. These are tiny, unconscious facial expressions that aren't voluntarily controlled, but can be picked up by others -- also unconsciously. Through microexpressions, we can arrive at conclusions about another person with little or no effort on our part. In fact, microexpressions are so tiny and subtle that we may not even know why we trust a person or find him unsavory.

Living just by our intuition would be difficult, and even dangerous -- our intuition can be wrong. For example, if you approach a lion's cage at the zoo, you may make an intuitive judgment about the lion on the other side of the glass. Perhaps you noticed something about the lion's demeanor that puts you at ease. The intuition that he's a friendly lion, coupled with the urge to pet him because he's fluffy, may lead you to climb into the cage -- despite everything you've ever cognitively learned about the ferocity and danger of lions. As the lion devoured you, you would learn that your intuition led you astray.

The converse is also true, however. Living a life based only on rational, deliberate examination is no better than living by intuition alone. Locking eyes with a total stranger across a crowded room and feeling a jolt of emotion is highly irrational. You've never spoken to this person and know absolutely nothing about him beyond his superficial appearance. Depending only on your rational mind, you may allow the moment to pass and miss the opportunity to meet the person you could have spent the rest of your life with.

For more information on swearing and intuition, read the next page.

How do you get a job as a professional shopper?
How Astrobiologists Work
Why Giving a Professional Reference Can Be a Minefield