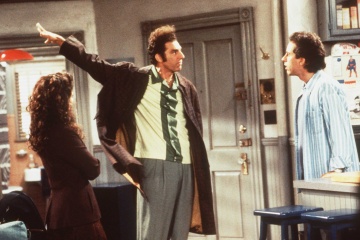 Standardized patients were around way before Kramer's famously nutty depiction of one on the hit TV show "Seinfeld," but that episode helped to boost awareness big time.
Getty Images/Handout

Standing in a hospital exam room, a medical student asks, "Are you experiencing any discomfort?" The patient replies, "Just a little burning during urination." The student makes a note on his clipboard. "Any other pain?"

Here's where it gets a little weird.

"The haunting memories of lost love." The patient lights a cigarette. "Our eyes met across the crowded hat store, I a customer, and she a coquettish haberdasher ... I burned for her. Much like the burning during urination that I would experience soon afterwards."

"Gonorrhea!" cries the student. The room breaks into applause.

Those of a certain age may find this scene familiar. It's from Cosmo Kramer's stint as a fake patient in a 1998 episode of "Seinfeld." The character is part of a medical-school training exercise in which he pretends to have an illness and medical students try to diagnose him, and it comes off as absurd. But it turns out, if you remove the hammy monologue and the applause, and the smoking, we're looking at a standardized-patient interaction.

Standardized patients, sometimes called "simulated patients," have been around since the 1960s, first conceived by a neurologist who was having trouble finding sufficient real-life teaching experiences for his students [source: GVSU]. By the 1980s, standardized patients, or SPs, were a common training tool in medical schools across the United States. Now, all U.S. physician-licensing exams include a standardized-patient interaction, and there are SP programs all over the world, not only in medical schools but also in dental, pharmacy, nursing and veterinary training [source: ASPE]. (In the latter, disappointingly, it's the pet owner doing the acting.)

The concept is pretty straightforward: SPs provide a safe opportunity for emerging health professionals to learn, make mistakes and practice. A healthy person acts the part of a sick person with a specific illness, offering doctors-in-training the chance to interact with, examine and diagnose someone who won't actually suffer any harm if the student messes up.