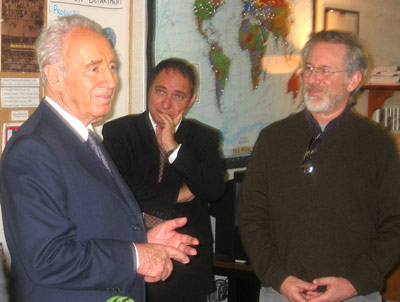 Prior to the actual videotaped testimony, the interviewee and interviewer met to fill out an elaborate, 40-page questionnaire known as the PIQ, or "Pre-Interview Questionnaire." According to the Shoah Foundation, this document was designed to elicit detailed biographical information from the interviewee, such as:

Interviews usually took place in the interviewee's home unless an alternate locale was requested. Interviewees also decided in what language the interview would be given. During the interview, the survivor or witness discussed various aspects of his or her life both prior to, during and after the Holocaust.

As previously mentioned, for consistency and continuity of the archive, the interviewers followed a certain methodology. The same was true for the 1,000 videographers hired by the Shoah Foundation -- they were trained according to specific videotaping procedures and were held to that strict format. The Shoah Videographer Guidelines document covers everything from lighting to taping the interview to how to deal with the emotional effects of the stories the videographers witnessed.

After the interview was complete, the interviewee was given the opportunity to share photographs or other personal artifacts by displaying them to be videotaped. At this time, family members were allowed to join the interviewee to participate in the final portion of the testimony. The Shoah Foundation has given each of the 52,000 interviewees a copy of his or her videotaped testimony.