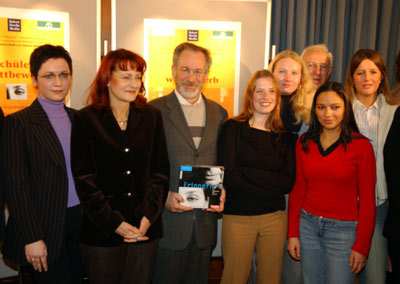 Edelgard Bulmahn, Germany's Federal Minister of Education, and Steven Spielberg congratulate past winners of the student contest "Remembering for the Present and the Future - Tolerance wins!"
Photo courtesy Shoah Foundation

To most of us, the amount of hatred required to instigate and maintain such violence is unthinkable. That's what genocide is about -- hatred for those who are different. It may begin with prejudiced thoughts or stereotypes about a certain group of people. For some, these prejudiced thoughts can lead to acts of bigotry and discrimination. This can then escalate into acts of violence like vandalism, assault, or murder. The Anti-Defamation League describes this as the "pyramid of hate."

Right now, world leaders are debating the crisis in Sudan's Darfur region, trying to decide if the systematic displacement, murders and rapes occurring there can be seen legally as genocide. Again, we're in danger of not learning from our past. But the Survivors of the Shoah Visual History Foundation is working to remind us of the suffering that prejudice, bigotry and hate can bring.

Today, most of us are bombarded with a barrage of information in many formats, so much so that we can easily become desensitized to what's going on around us. Between MP3 players and computers and video game consoles and home theaters, reading text in a book or listening to an audio-taped interview can't compete -- it isn't engaging enough. What makes the testimonies of the Shoah Foundation so compelling is that they are visual histories. If we are to learn from our past, we need to be able to connect to it. When people watch a Shoah testimony, they're given the opportunity to connect to the survivor or witness because it feels like he or she is actually talking to them. As Shoah Foundation CEO Doug Greenberg puts it, "there's something palpably different about watching video."

"The personal life histories of the Holocaust survivors and other witnesses in the Shoah Foundation archive speak eloquently to the need to eliminate hatred and violence. Their testimonies have an important and powerful message to share with the world."

How You Can Help

You can help make sure the Shoah Foundation keeps reaching people around the world. As a nonprofit organization, the Shoah Foundation relies heavily on support from its donors. CEO Doug Greenberg reports that founder Steven Spielberg has contributed about a third of the money the Foundation has used over the course of its 10-year existence, and explains that it is paramount that other people continue to support the Foundation. It's crucial, Greenberg says, "that there's a community of donors that care about what we do now so that in the future, the Shoah Foundation will still be able to pursue its mission as effectively as we do today, even when Steven Spielberg is no longer available to be a benefactor."

If you're not in the position to make a monetary donation, there are volunteer and internship opportunities available, as well. Visit the Survivors of the Shoah Visual History Foundation Web site to learn more about how you can help support the Foundation.