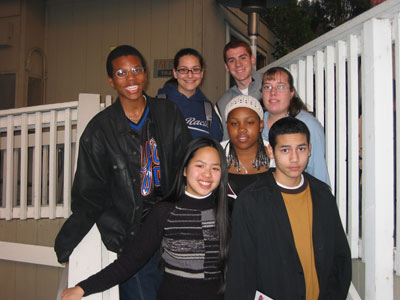 The newest addition to the Shoah Foundation's educational catalog is the classroom video, "Giving Voice." The Shoah Foundation brought seven students from around the Los Angeles area together for an intensive day of viewing testimony from the Visual History Archive and participating in follow-up exercises. Much like a reality TV show, the students were videotaped during the entire 12-hour day, while they watched the testimonies and worked through the exercises. After the day-long workshop, the students were each given a mini-DV camcorder and asked to create their own documentary of their friends and family and their surroundings at school and at home, all the while incorporating their emotional response to the visual histories they had viewed during the workshop. While completing their documentary assignment, the students made "candid and poignant observations about the examples of intolerance and bigotry they see every day and offer[ed] eloquent examples of how each of them strives to take responsibility for building a better, more tolerant world."

The program is available in both DVD and VHS format and comes with a teacher's guide and copies of the actual testimony the students in the program watched and reacted to themselves. Doug Greenberg suggests that this type of education product "doesn't put the onus on the teacher to try to figure out how to make this material relevant to young people today."

The Pyramid of Hate

In partnership with the Anti-Defamation League and Court TV, the Shoah Foundation has created a highly interactive classroom exercise that encourages students to:

The lesson incorporates the Pyramid of Hate, developed by the Anti-Defamation League, and survivor and witness testimonies from the Shoah Foundation's Visual History Archive. In one portion of the lesson plan, students are shown several testimonies and are then instructed to match each testimony with a particular level on the Pyramid of Hate.