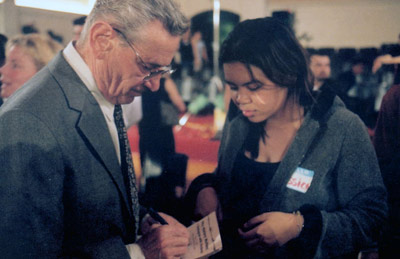 The final act of the three-act structure of the Shoah Foundation is concerned with turning the survivors into educators. The race against time to collect the testimonies is over, but it can be said that the Shoah Foundation finds itself in another race, perhaps even the most urgent leg of its journey. In an interview with the New York Times, Steven Spielberg suggests that the goal of the current race is the "conscious minds of young people." He goes on to say that the youth of today must learn "the dangers of stereotyping, the dangers of discrimination, the dangers of racial and religious hatred and vengeful rage."

To accomplish this goal, the Shoah Foundation takes a multi-faceted approach centered on outreach, including (among other activities):

The Shoah Foundation partnered with 23 agencies and organizations in 11 countries to make all of this happen, and it continues to find new partnerships.

More discussions are underway with Italy, Australia, Brazil, Hungary, Poland and Russia. "It's a long list," said Shoah Foundation CEO Doug Greenberg, "but it's not long enough." Finding international partners is quite a challenge. It takes a considerable amount of time, including multiple international trips (usually made by Greenberg) to meet with the potential partners. As a non-profit organization, finding appropriate funding for projects can also take time.

The foundation continues to find partners in the United States, as well, including recent alliances with the Anti-Defamation League and Facing History and Ourselves, a 28-year-old organization that specializes in professional development programs for teachers.

"We want to create something that gets us moving toward our goals -- not just something that makes us feel good, but something that really makes a difference. So we try to be careful and systematic even though there's an urgency we feel about moving forward as fast as we can."