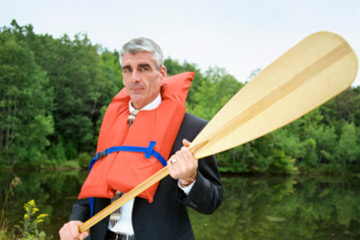 This guy's ready for a new career adventure. How about you?
Creatas/Creatas/Thinkstock

In an economy limping along with a high percent unemployment rate, it's not unusual for even the gainfully employed to test free agency and see what else might be available. In a 2009 Salary.com survey, when global financial markets were still plummeting, more than 65 percent of workers said they were actively looking for new jobs.

It's one thing to change jobs, something most people will do more than 10 times between the ages of 18 and 42, but it's quite another to change careers [source: Bureau of Labor Statistics]. Making the leap from a field in which you've been trained and have experience to a wholly new one takes careful consideration, planning and the right expectations.

This is true of anyone interested in making a change, but what about professionals who have been in the workforce for 20 or 30-plus years? Baby boomers, born between 1946 and 1964, make up 40 percent of the labor force, and shifting gears later in life to focus on new career objectives can be challenging, but also rewarding. Seasoned professionals often have a different perspective than their younger colleagues. Middle-aged workers usually place more value on nonmonetary benefits, such as less stress, flexible work schedules and personal fulfillment, so when they're able to change careers they can make the jump to areas that are more professionally fulfilling rather than having to worry about how much they earn [source: Hsu].

Changing careers later in life can happen for a number of reasons, whether a job is obsolesced by technology or you're simply interested in pursuing a field that holds more interest for you. But don't take this lightly; a little planning, foresight and self-awareness can go a long way to helping you land your dream job.

If you're thinking about making a change, keep reading for some practical steps to take along the way.

Plan Ahead for a Mid-Life Career Change

Sitting in your cubicle daydreaming about becoming the manager of the Boston Red Sox may seem like a good way to plan for your next career, but it's unlikely to get you anywhere. If you're seriously considering making the leap, it's going to take planning. And lots of it. As we mentioned earlier, the national unemployment rate in the United States is high; as of June 2011, it was hovering at more than 9 percent. That means the competition for existing jobs is fierce. For a little perspective, consider that for every job that opens, there are five people unemployed [source:Bureau of Labor Statistics]. That statistic has increased from 1.7 unemployed people for every opening during the three years before the 2008 economic collapse. Nothing in the world intimidating about that, is there?

The first thing most employees do when they consider making a professional change is evaluate their current situation. Is the work fulfilling? Does it make good use of their skills? Notice that these are job-specific questions. Being unhappy with your boss, salary or work environment are all potential reasons for a jobchange, but not necessarily a career overhaul. So be honest with yourself about the actual work you're doing and try to be as objective as possible. Bosses come and go, so if your job is fulfilling except for a few variables, work on changing those before looking to make the leap into a new career. For middle-aged workers, chances are good that you are the boss; therefore, you may have more control over your situation than more junior-level professionals.

The next step is to evaluate this potential career shift to see how it matches up with your needs. You're leaving a career in which you have a certain level of seniority and, presumably, earn more than someone just entering that field. Take a long, hard look at whether you want to put in the longer hours and shorter pay that sometimes come with being the new kid on the block. Neither of these factors should keep you from going for it, just plan on setting aside a financial cushion or altering your lifestyle if you know a career change will result in a pay decrease. Do this by getting militant about "needs" vs. "wants" and trimming the fat from your day-to-day budget. Consider these sacrifices an investment in the new career.

Once you've decided that you want to move forward with a change, the next step will be to make sure you're prepared to actually do the job.

Social Networking: Not Just for Kids

According to a Forrester Research study, workers between the ages of 29 and 49 are the driving force behind social networking in the workplace. This is an older demographic than you might expect, but it's good news for middle-aged pros. Workers with years of experience also have years of contacts, usually across many industries, so turning to social networks can be a great place to start a job search in a new field. 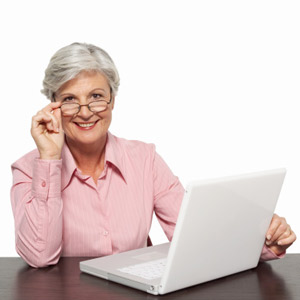 Finding Success in Your Second Career

We discussed the differing perspectives of those brand-new to the workforce and those who've been around the block. Once the second career has been embarked upon, the older worker once again has the advantage.

In a 2009 AARP study, 91 percent of workers who were 51 or older when they changed jobs said they were happier as a result [source: Hsu]. Less stress and more flexibility were the reasons cited, which, you'll remember from the introduction, are both leading reasons for seeking a change in the first place.

And because mid-life workers are often more focused on personal fulfillment rather than climbing the corporate ladder, they can concentrate on the work instead of angling for the boss's favor. This translates into added value for the employer. According to a study released by Bank of America Corp., 94 percent of employers think it's important to retain older workers. To do this, companies are offering scheduling options, telecommuting policies and retirement planning, and the statistics are bearing out the value companies are placing on senior staff. In May 2011, the U.S. unemployment rate for workers 55 and over was 6.8 percent, several points lower than the national average [source: Bureau of Labor Statistics].

Finally, and this is the area that may be causing the most hand-wringing, be prepared to report to someone younger than you -- maybe a lot younger. Bridging this potential generational gap will be a big factor in how much fulfillment you get from your new role.

There are a few ways to do this. First, avoid making generalizations. Not everyone born after 1980 is a slacker, honest. Plus, if you can demonstrate early a few key competencies (particularly in the areas of technology or new media), you can help obliterate any prejudices they may have toward the older crowd. Another way to make this relationship work is by encouraging feedback. One of the stereotypes that dogs older workers is that they're set in their ways [source: Hering]. Crush this right off the bat by actively soliciting input from younger team members. Finally, don't be afraid to wield your experience. If you have something to offer, don't keep it to yourself!

Making a career change is never easy, and doing so later in life carries its own set of challenges. But as you can see, with a little preparation, it's much more manageable than you might think.

Don't Wait Too Long to Make a Change

Even with laws designed to prevent age discrimination, there are certain careers that simply are no longer options after a certain age. U.S. military service, for example. The maximum age limits for the five branches of the armed forces are 35 for the Army, 27 for the Air Force, 34 for the Navy, 28 for the marines and 27 for the Coast Guard.

10 Extinct Job Titles
How do you get a job as a video games writer?
10 Fun Careers in Medicine